A tale of poor planning, an underestimated trail and injury.

Shell is an adventurer, a risk taker. A free spirit who throws caution to the wind.

Quickly bored with the logistics of planning. Unwilling to become tied down with tedious details.

Most often Shell will find a destination and leave the 'getting there' to me.

I am not complaining. My role as planner suits my personality. A list maker. A purchaser of maps.

Information and research is what I enjoy.

Shell pushes me from my comfort zone and I attempt to keep our walks non life threatening.

This symbiotic relationship works well. Most of the time.

On this occasion my preparation was poor. Limited on time I read a few quick reviews on the hike and made some incorrect assumptions on distances.

The plan was to hike into Blue Gums and return on that evening. I estimated the return trip to be just over 20km.

In hindsight we fell well short of our goal though we still managed 19km in 9 hours.

This trail was difficult in the wet conditions. When Shell rolled her ankle my miscalculations became even more problematic.

Because we always pack for overnight hiking there was no real danger.

Heading South on the M1 simply follow the signs to the Blue Mountains.

Passing through Blackheath and take Mt Victoria Road on the right.

This dirt road terminates at the trail head after about 5km.

We arrived at 9.00am after coffee and breakfast in Springwood.

It was raining and thick with fog.

Regardless, we were both keen for another solid hit out on the trail. 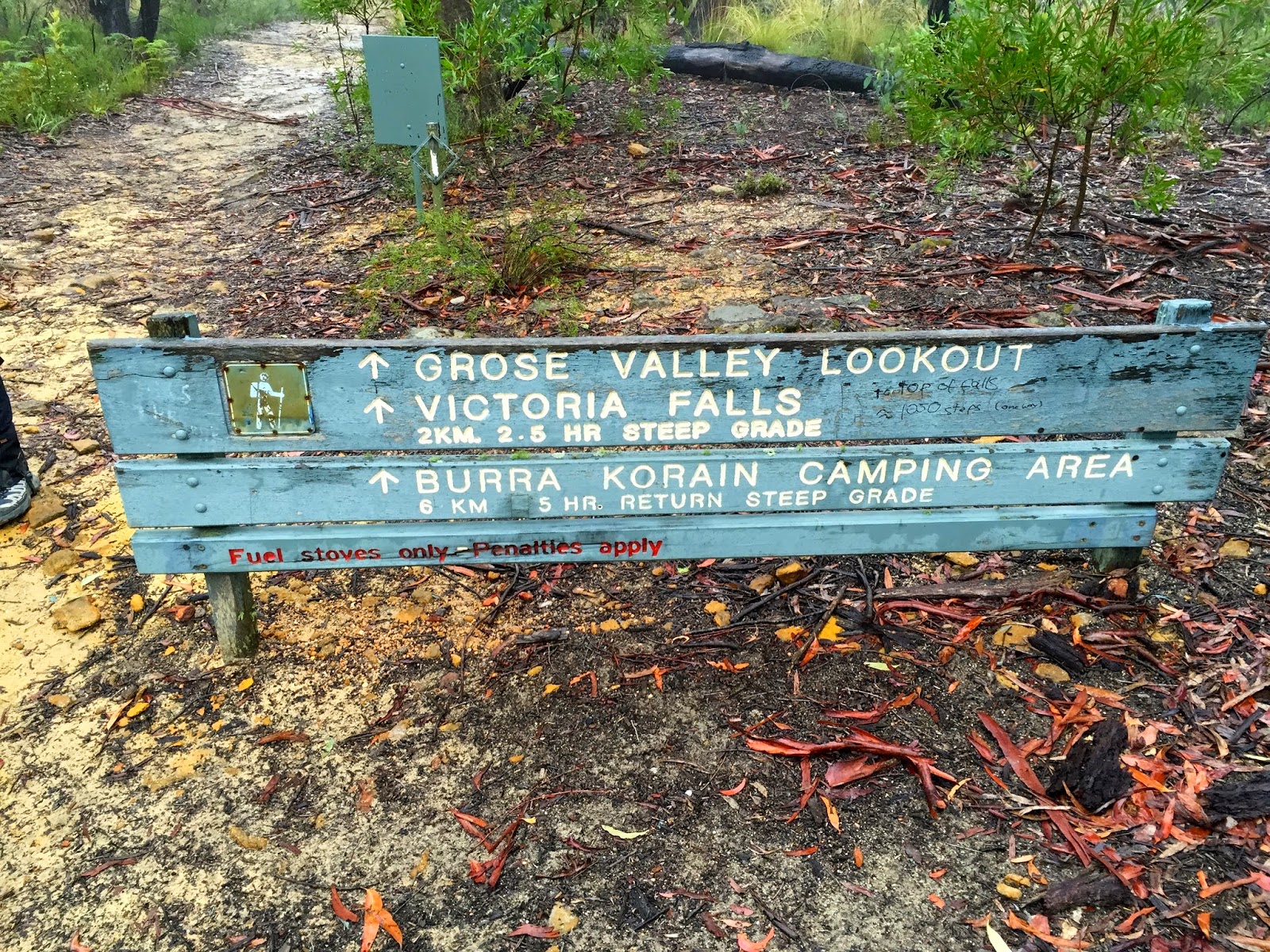 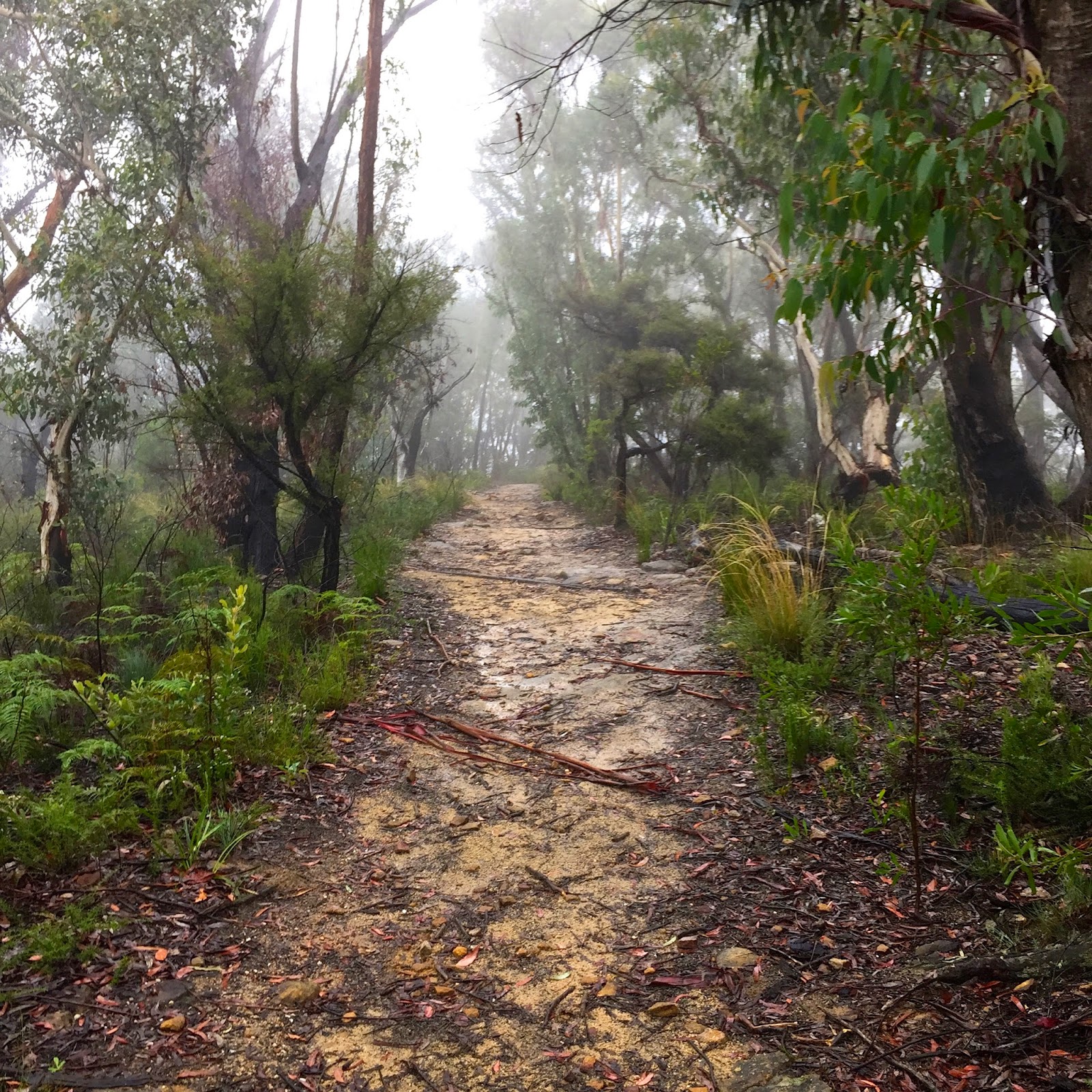 A wet and foggy start. 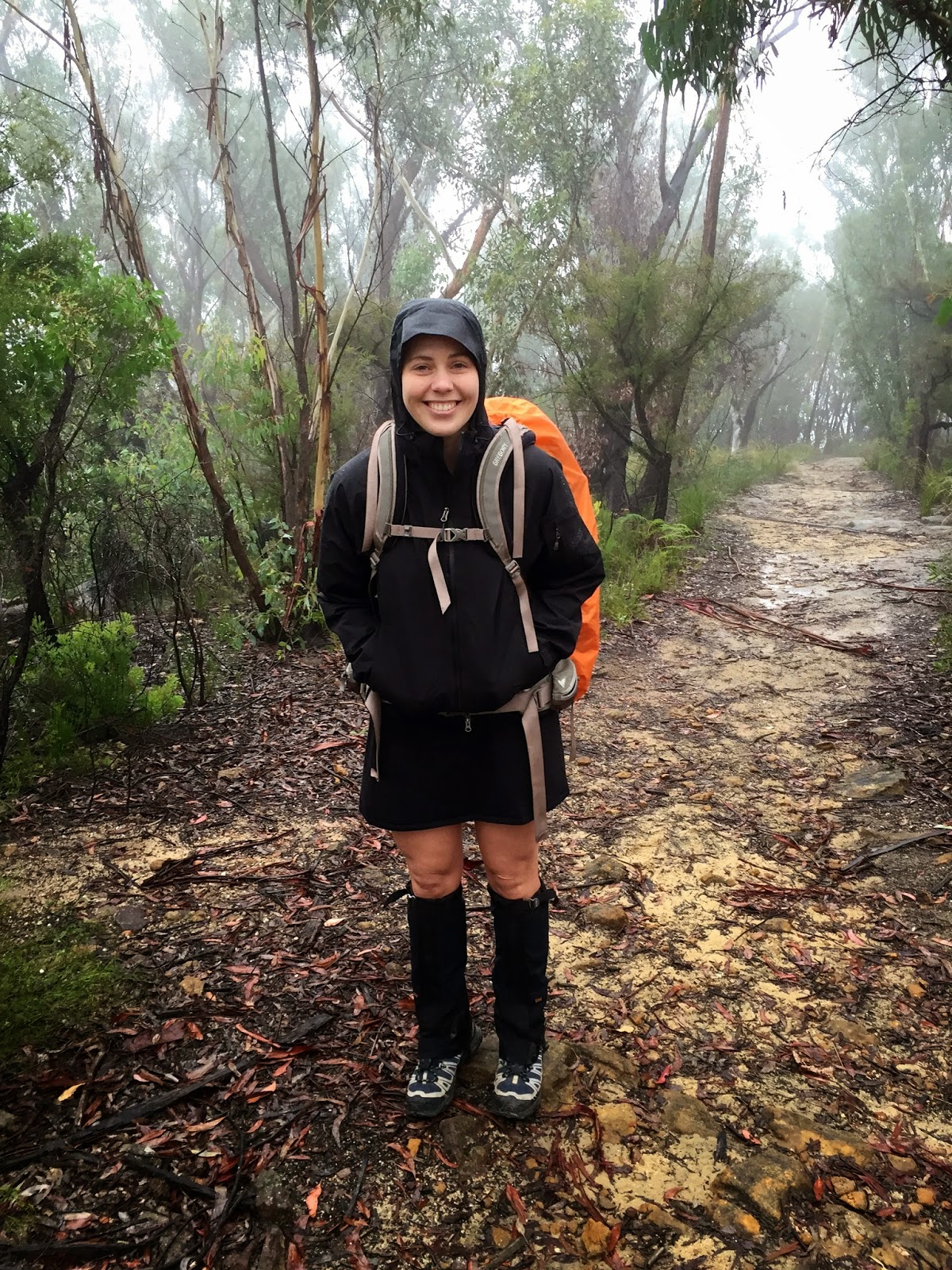 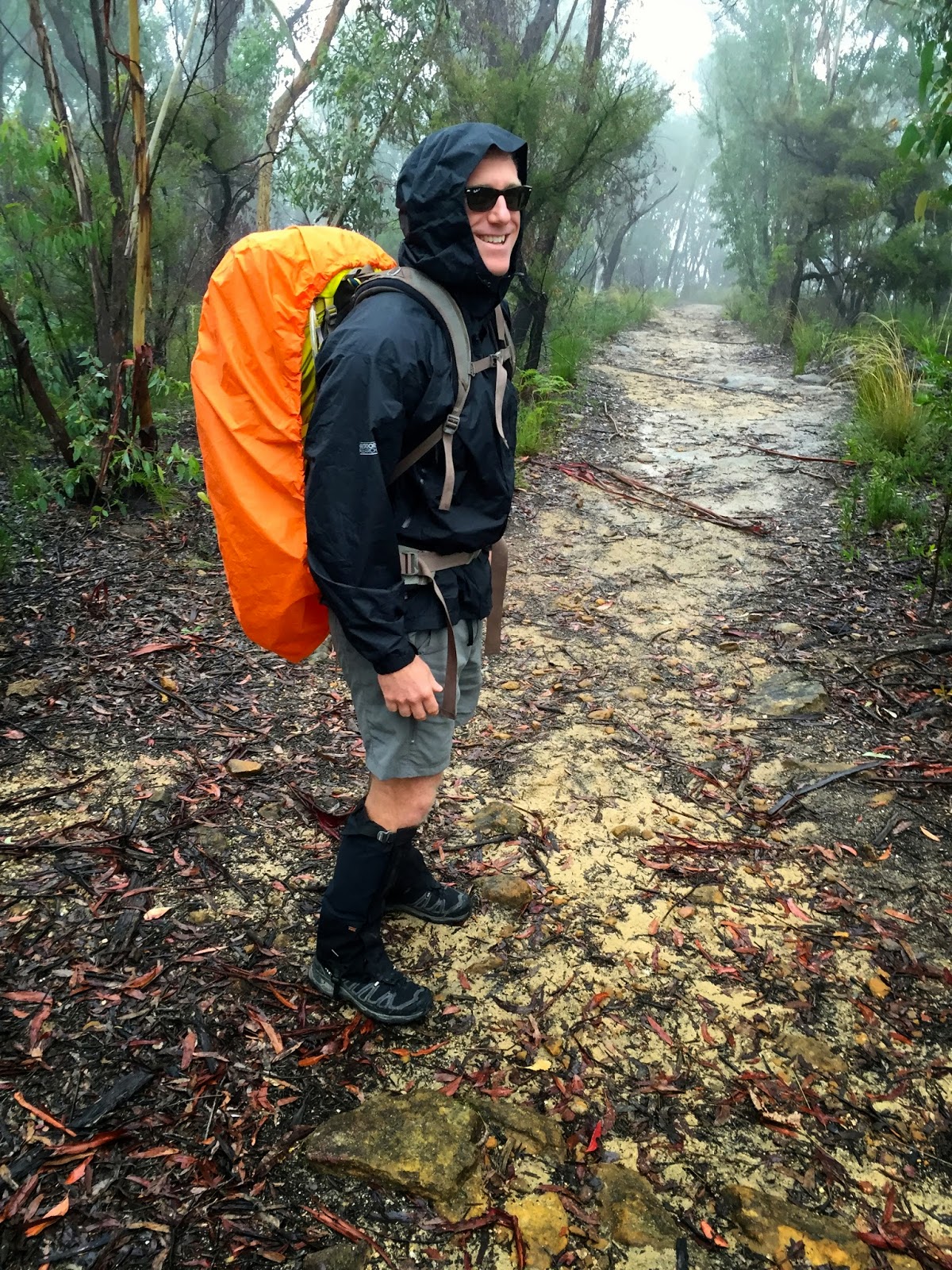 Though I had commented on the weather during the trip I was looking forward to a wet wether hike.

The temperature was still mild and modern gear manages to keep you dry for longer.

The mood was light hearted as we set off.

The trail quickly arrives at the Grose Valley lookout. 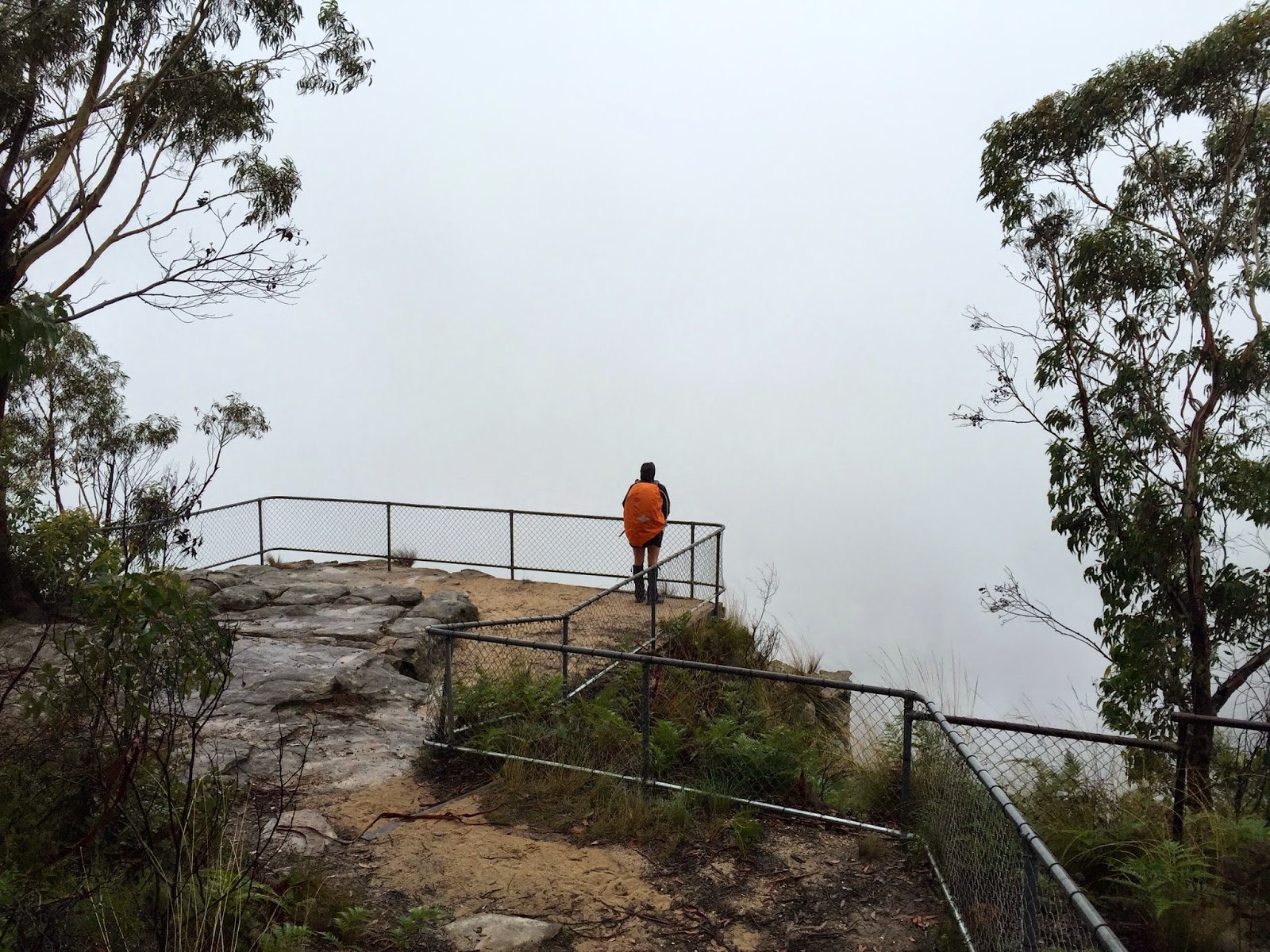 Sweeping views of the Grose Valley.

The trip down to the falls and the valley below can be steep at times.

The trail is clearly marked and easy to follow.

Considering the weather, we took our time as the wet rocks were occasionally slippery and at times the drop is sheer and long.

Caution aside, the trail descends quickly and the scenery is pleasant. 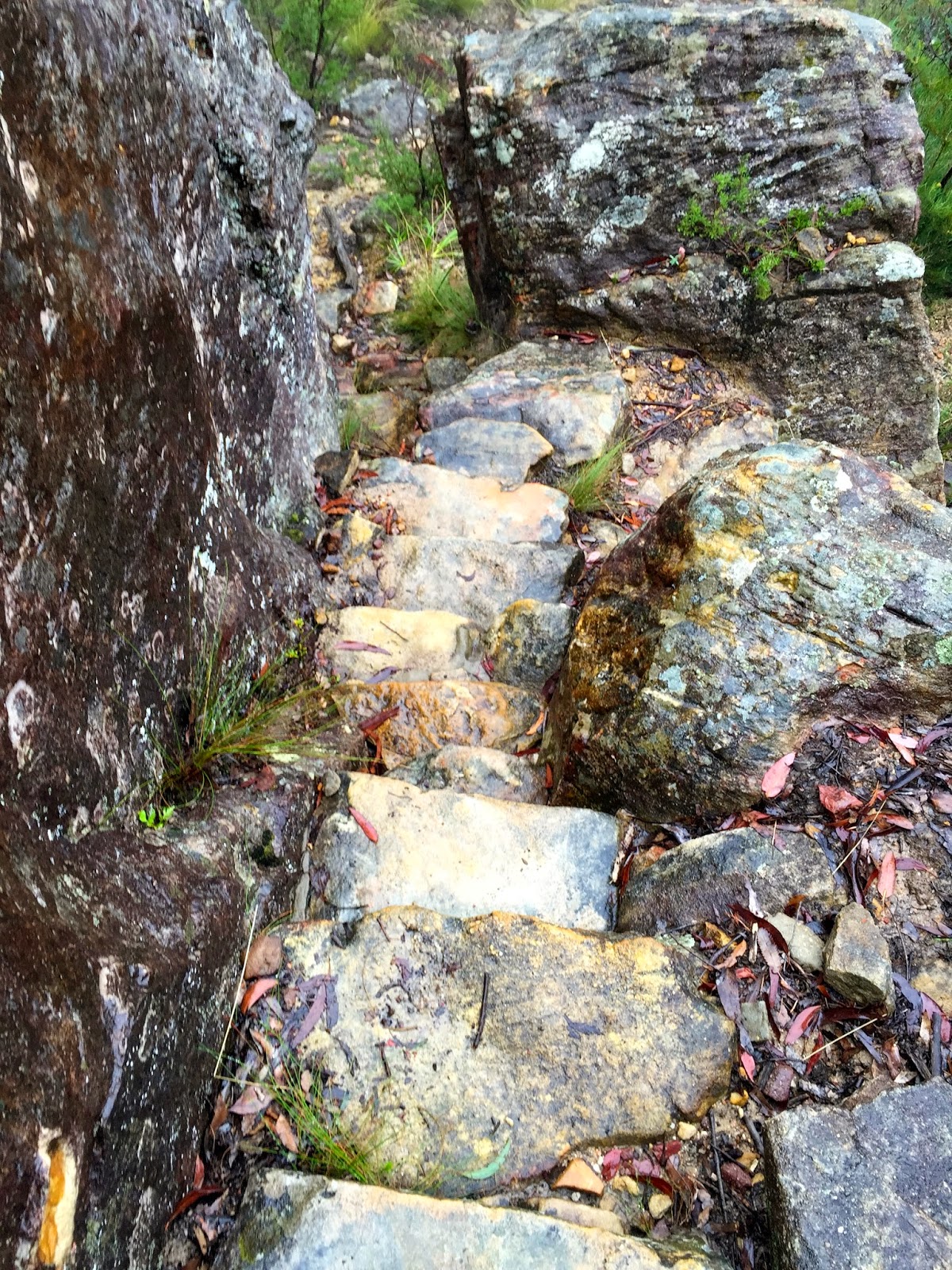 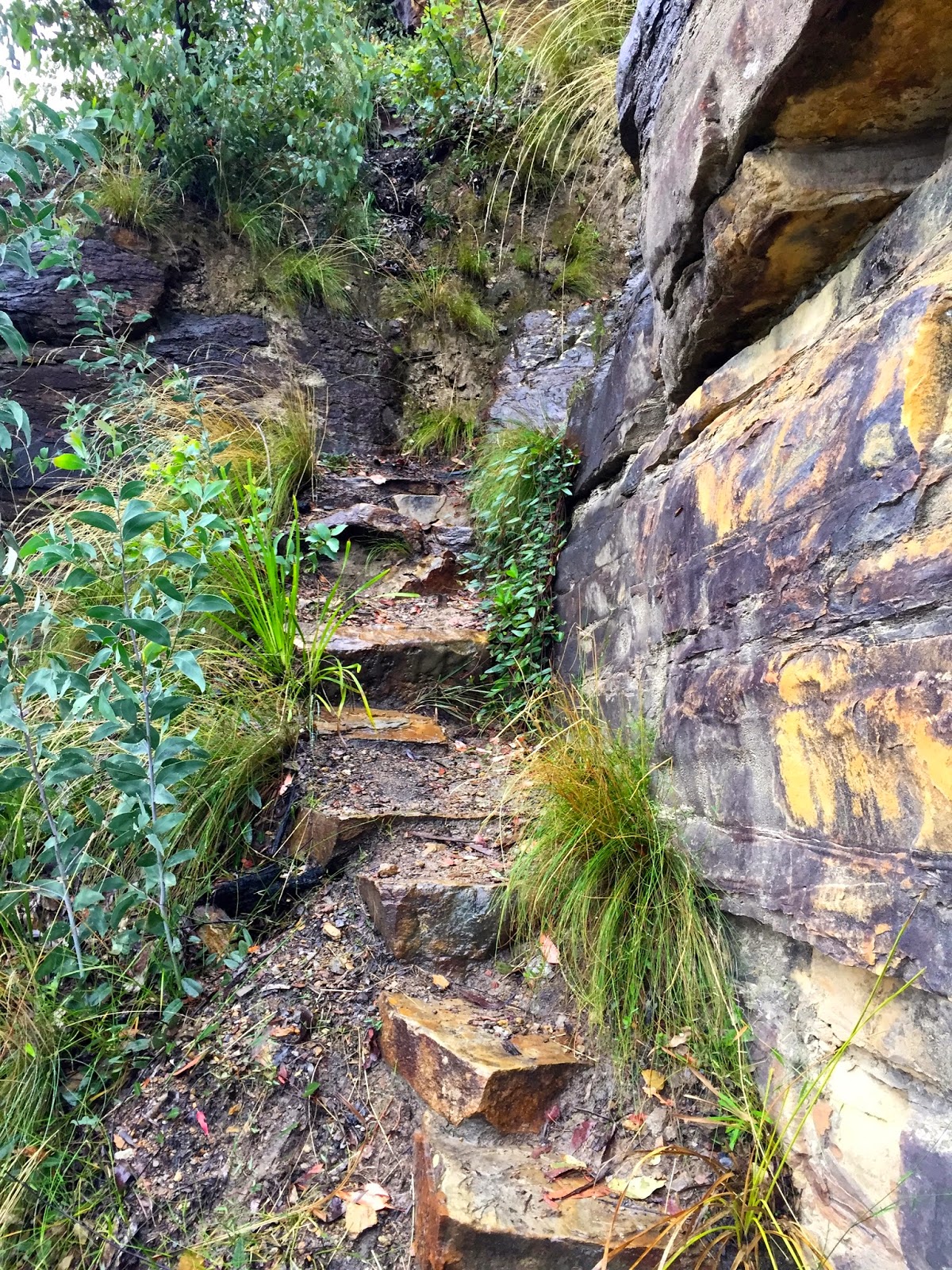 The hike to the valley floor. 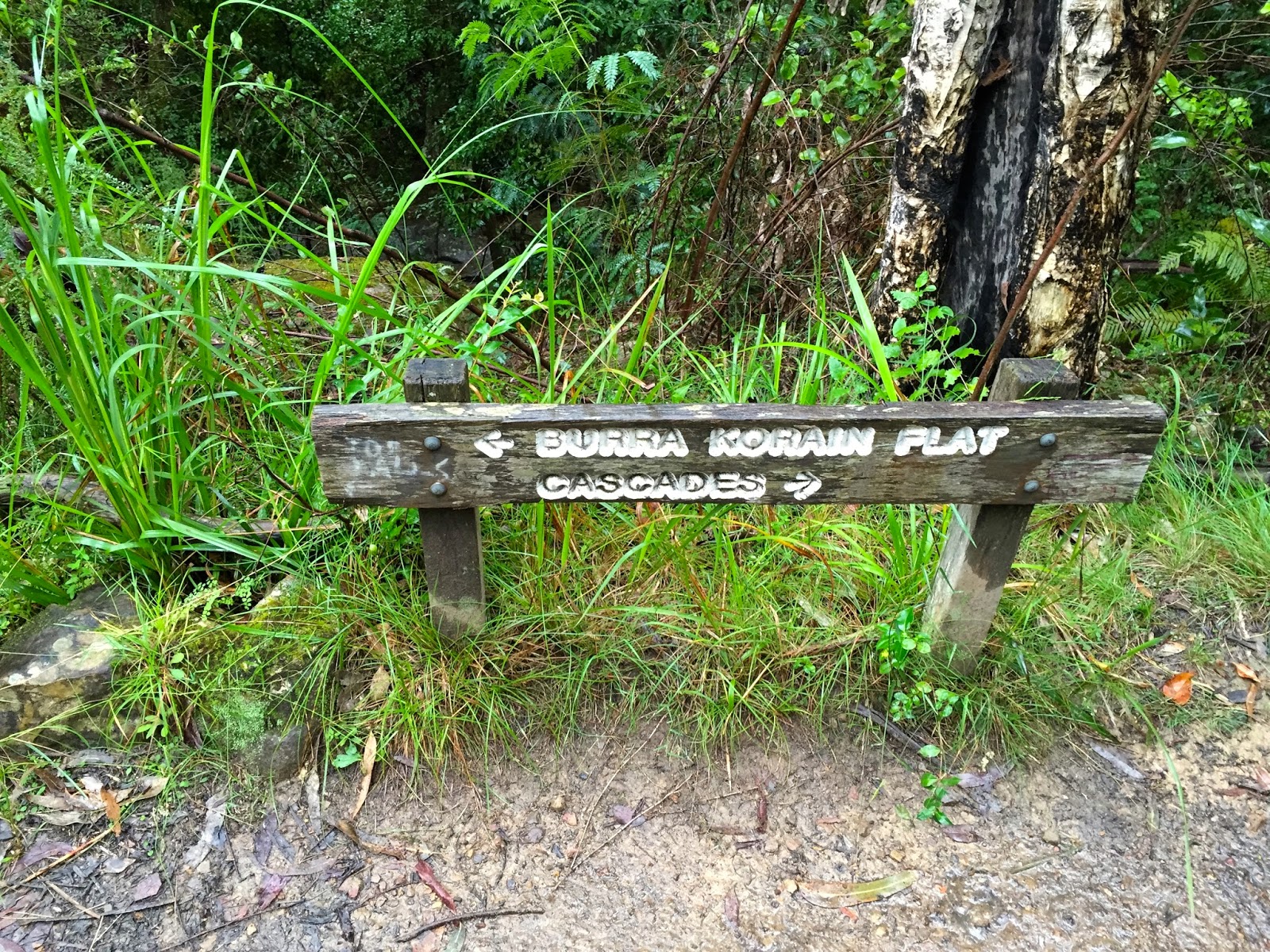 Close to the bottom there is an opportunity to detour to the Cascades.

The walk is short. Through a pretty rain forest to the Cascades.

The Cascades are certainly worth the walk. 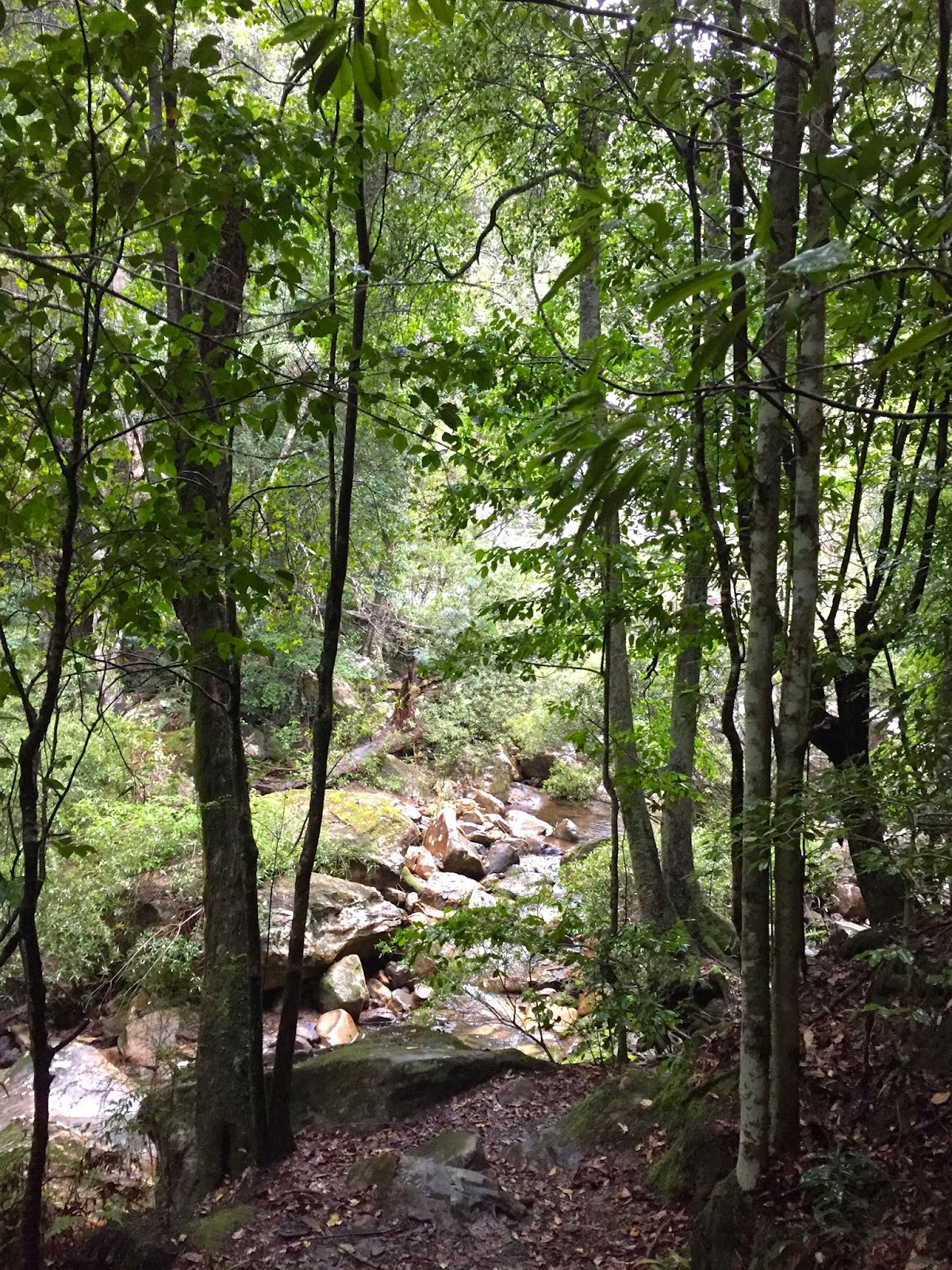 Through to the Cascades. 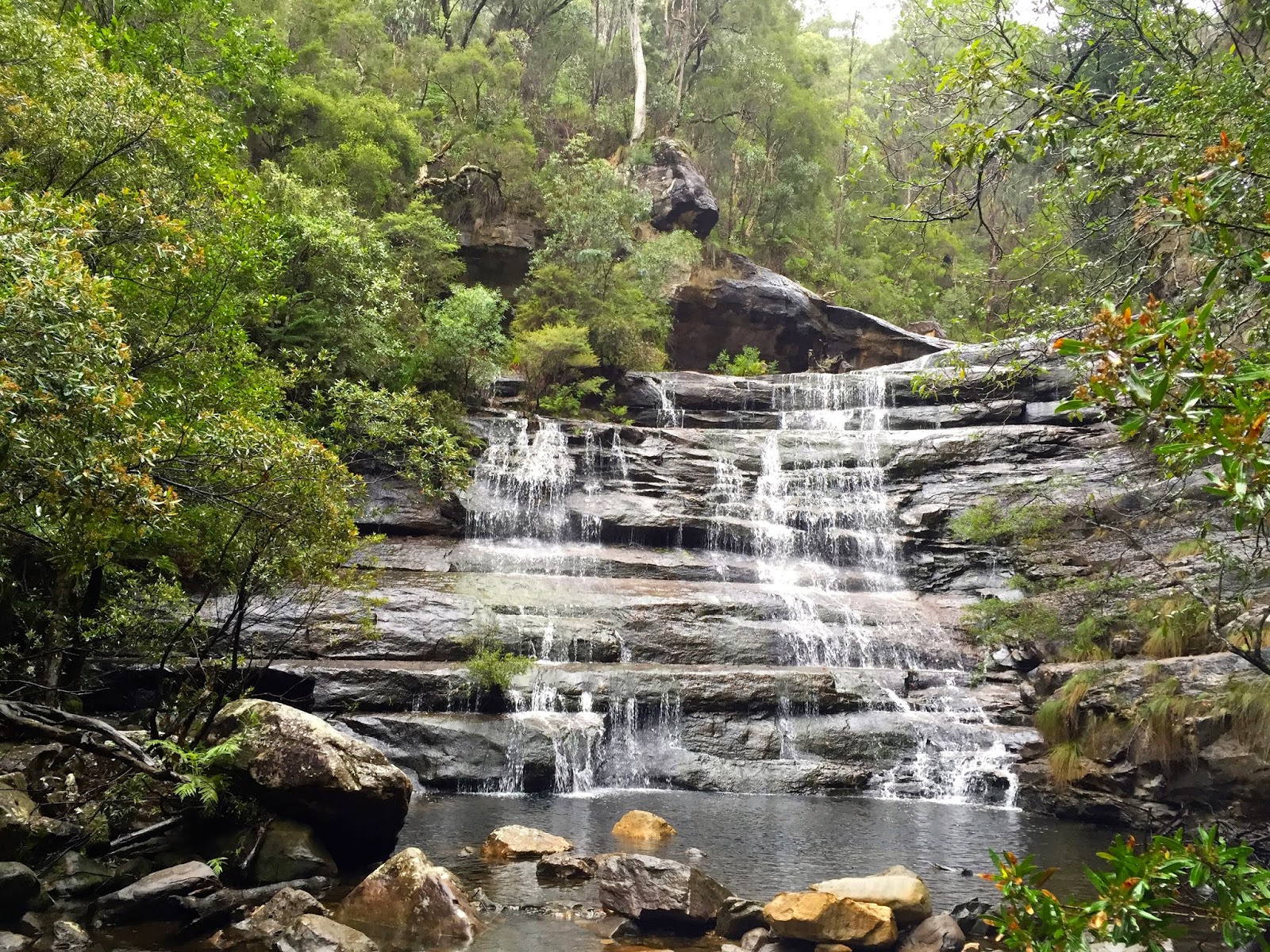 Soon after is another side trip to the top of the Victoria Falls.

Another short journey which is worth the effort.

I have mentioned previously how much I love these streams.

The sound of fast moving crystal clear water over a rock bed is hypnotic. Its subtle music followed us for the entire hike.

I recall falling asleep to this tune in the Victorian Alps. 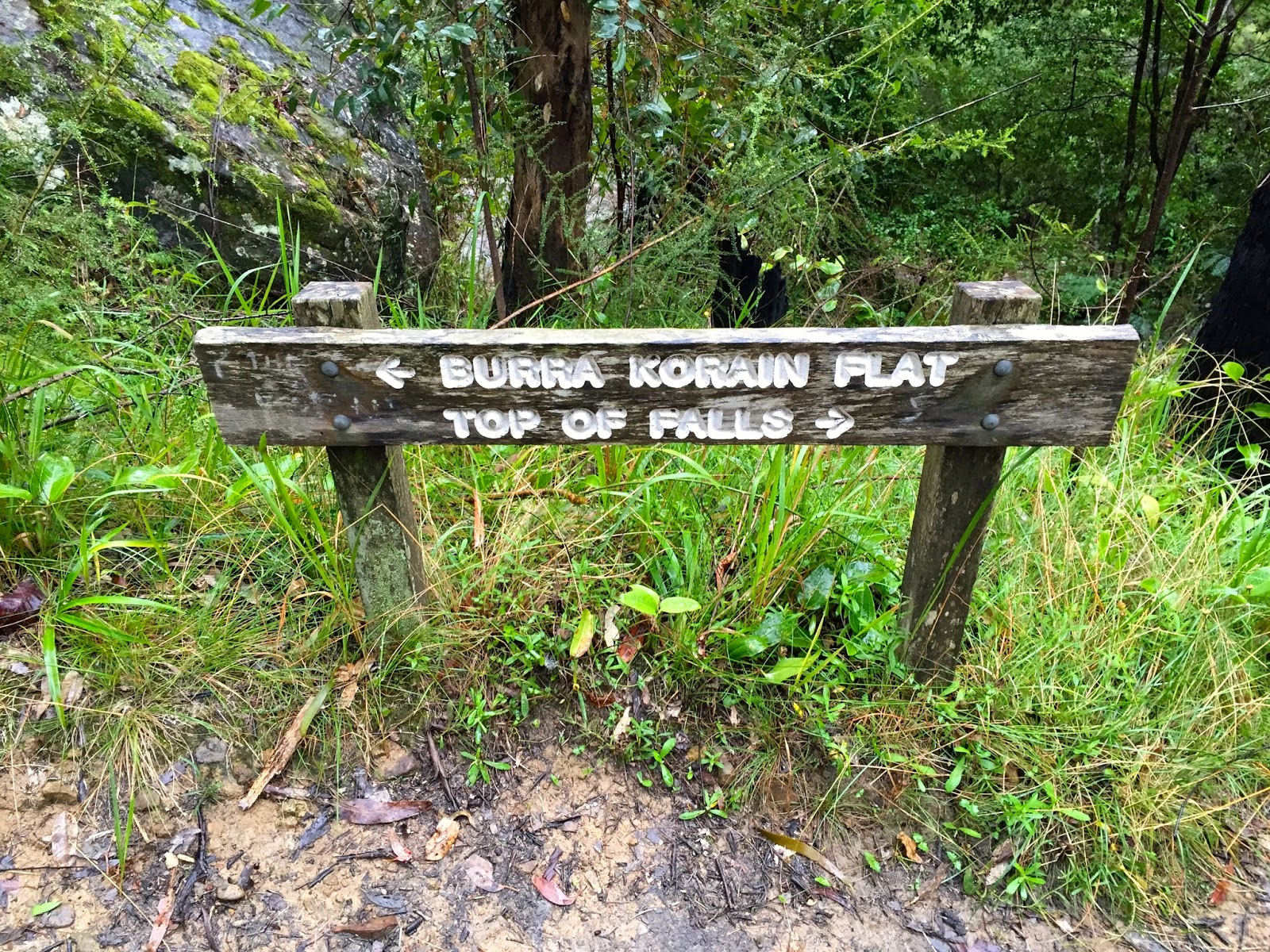 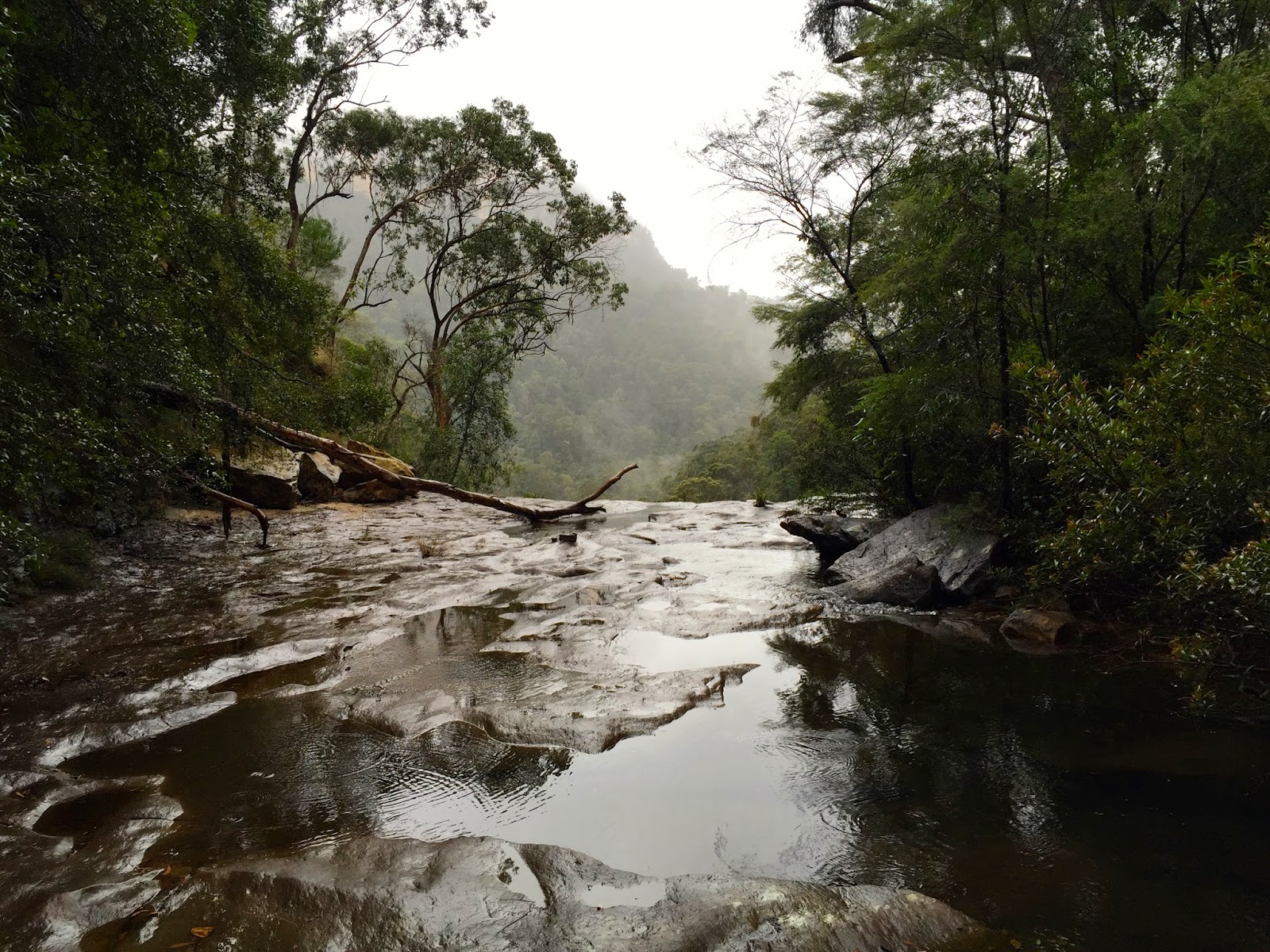 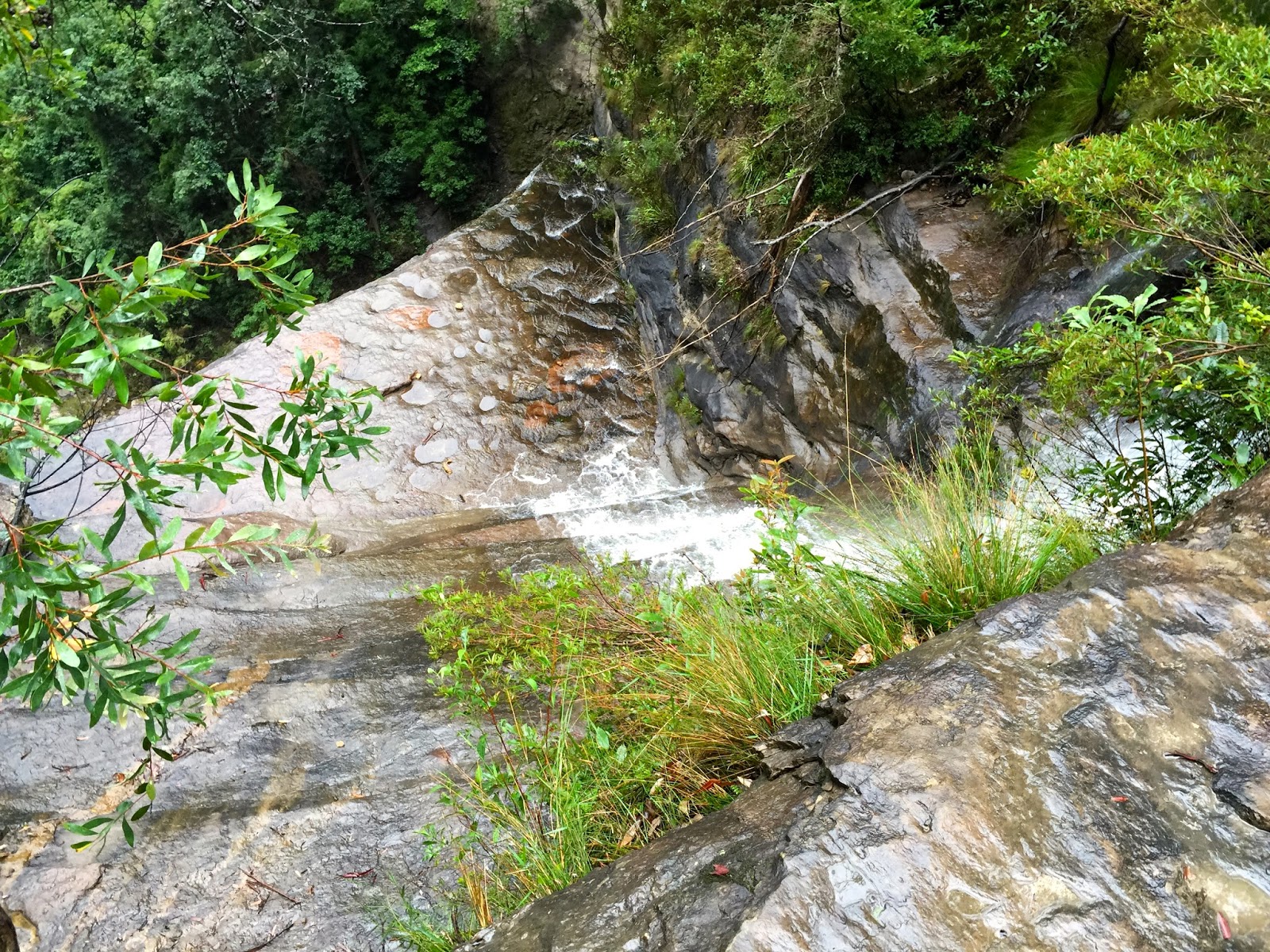 The top of the Victoria Falls.

Another short hike, one which requires the most caution in wet conditions, brings you to the base of the falls.

Victoria Falls is two separate drops. While not as inspiring as a single drop the sandstone backdrop makes for a pleasing view from the base. 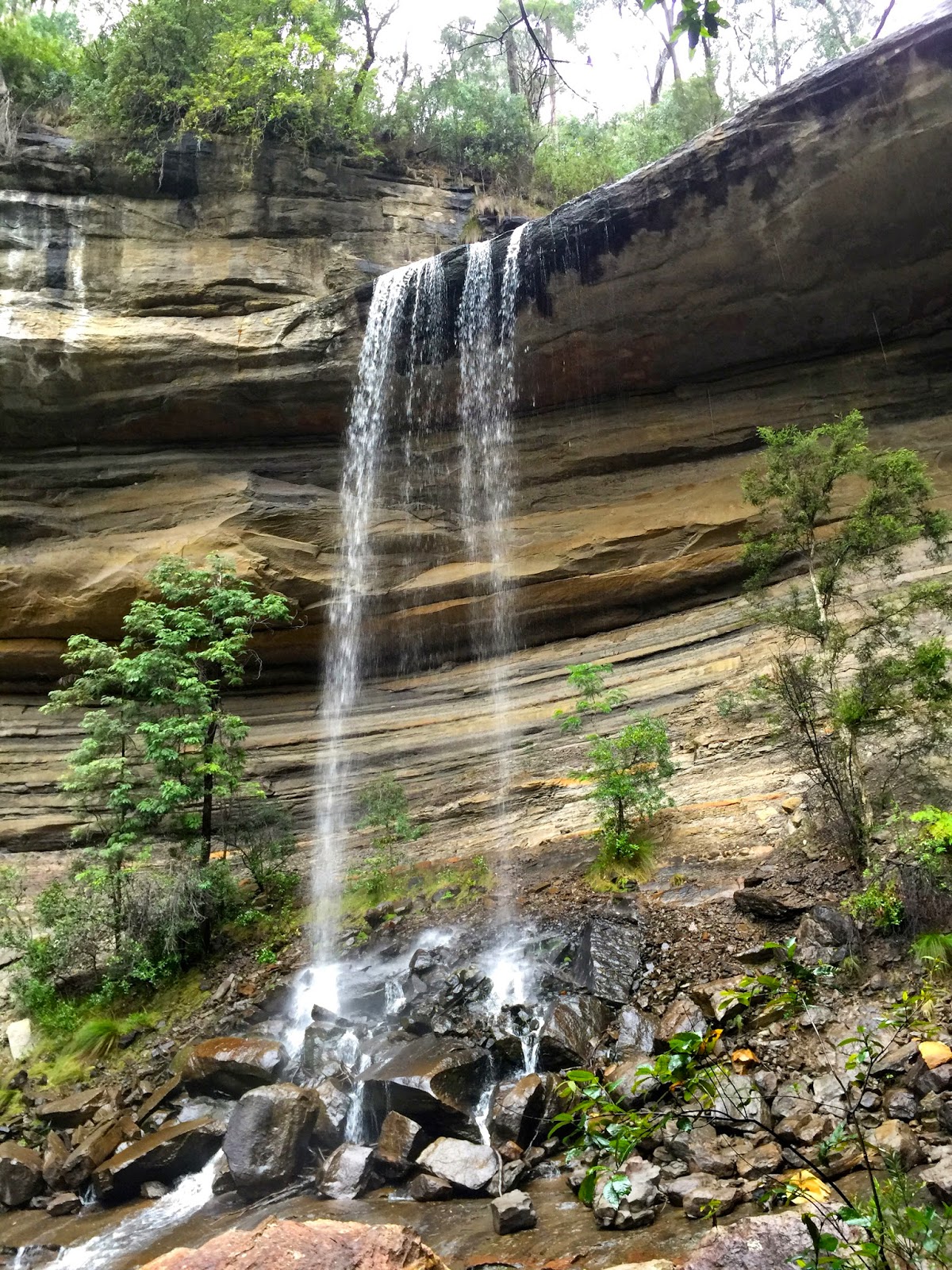 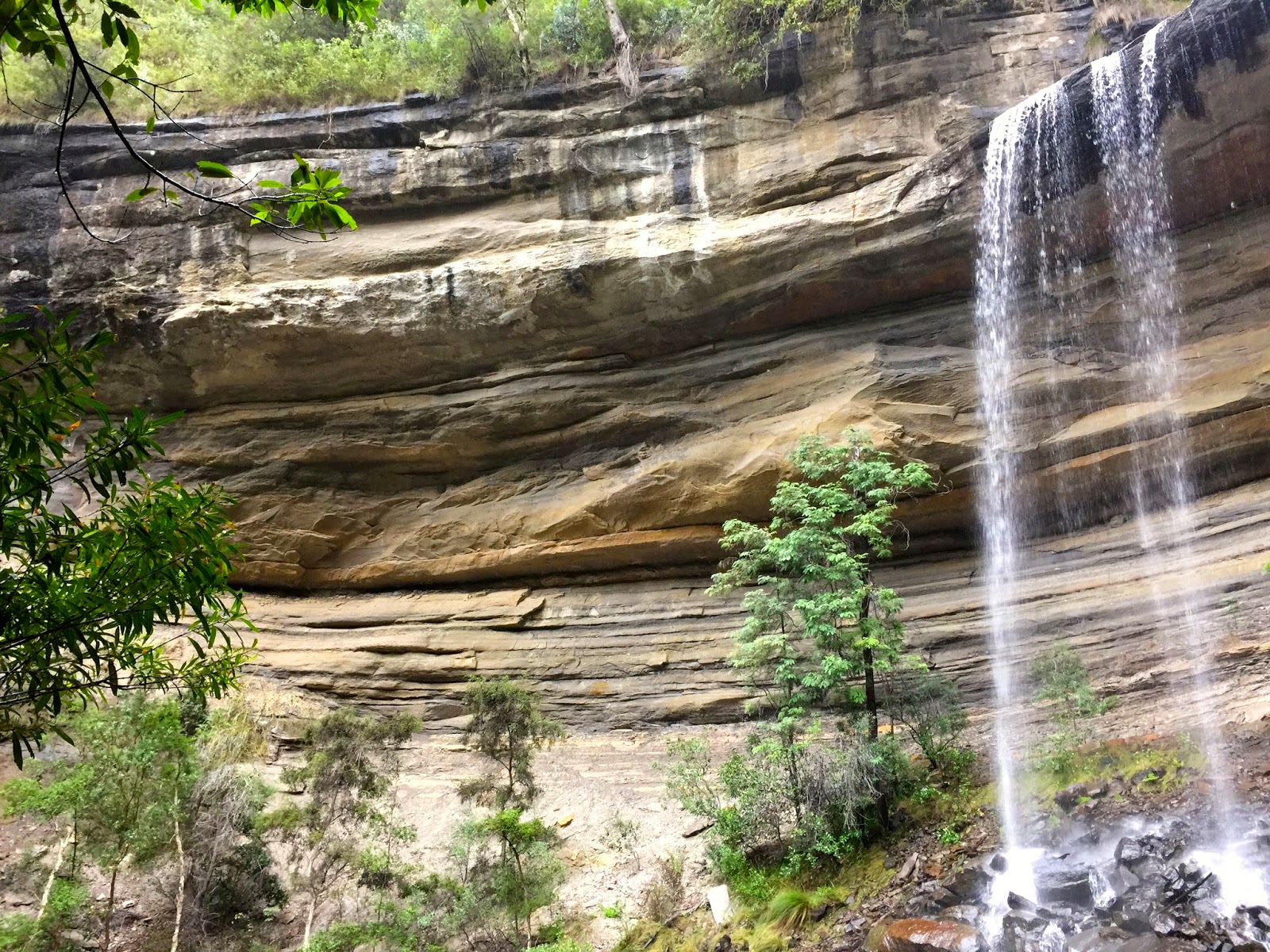 The base of the falls.

Continuing on Shell set a good pace considering the terrain.

Despite the rain and blissfuly unaware I had under estimated the distance of the hike by over 6km our spirits were as we made our way through the Grose Valley. 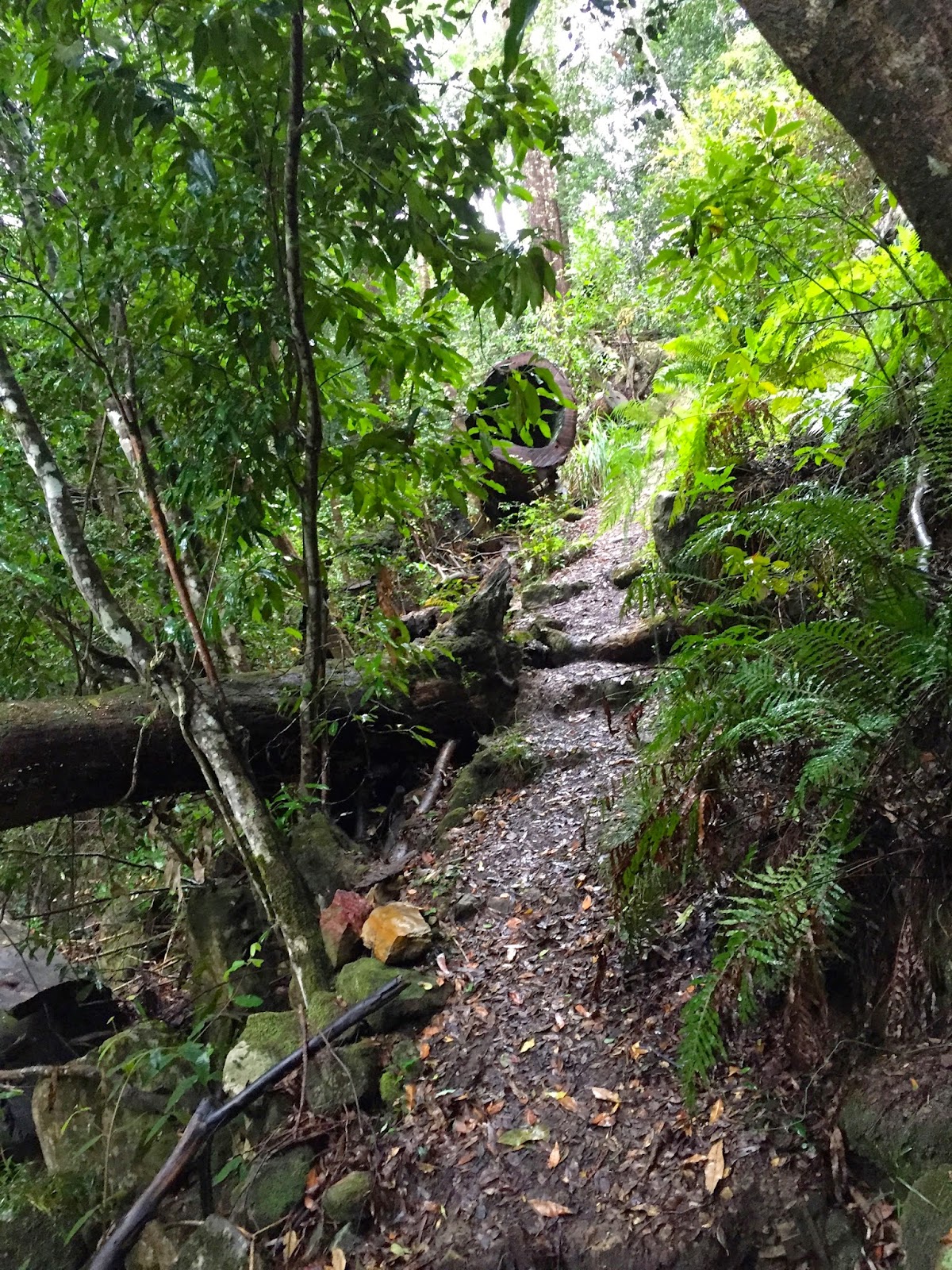 The trail on the Grose Valley Fall.

Occasionally the trail was washed out.

Easy to cross we applied some caution as the footing was wet and slippery. 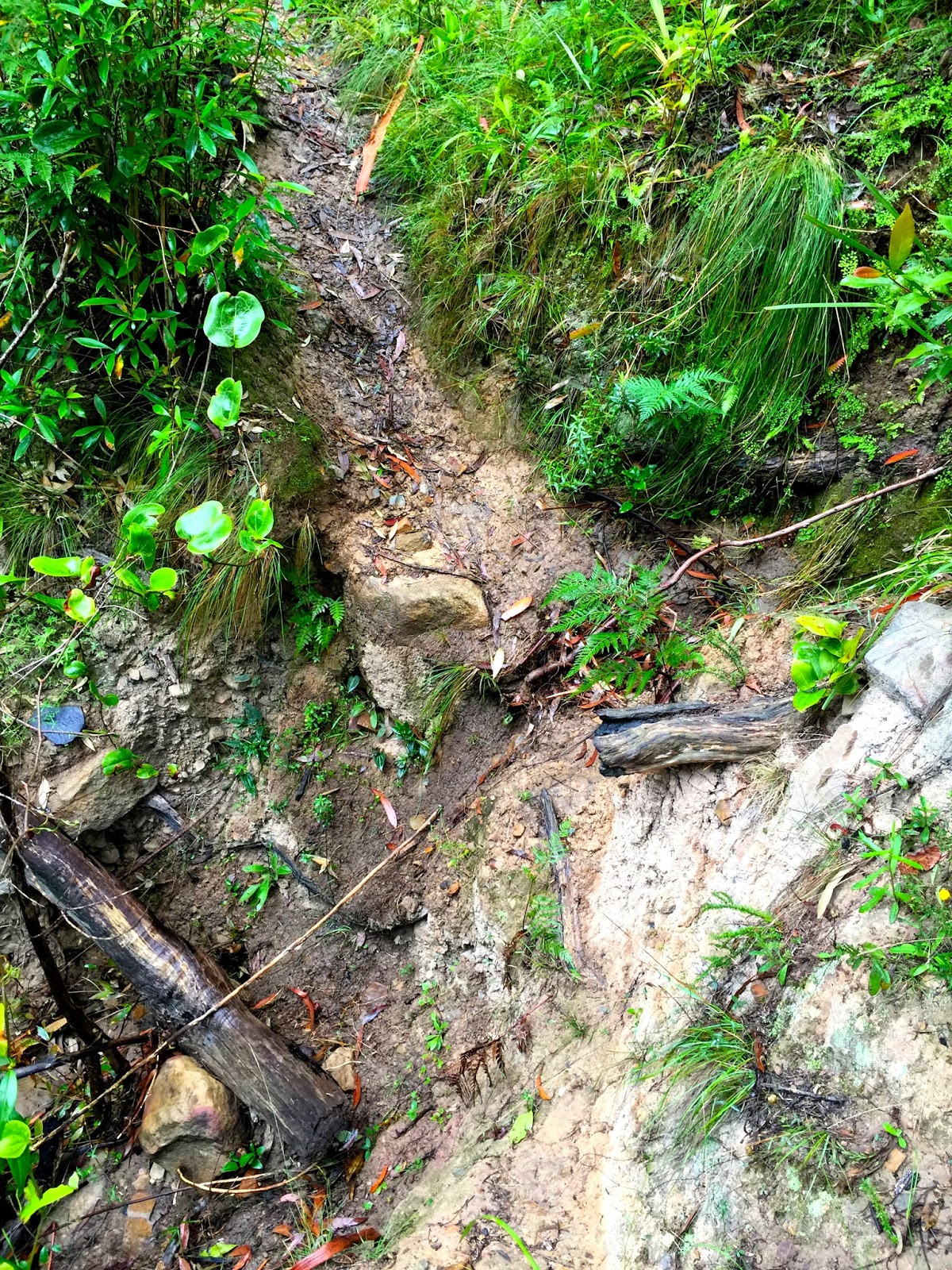 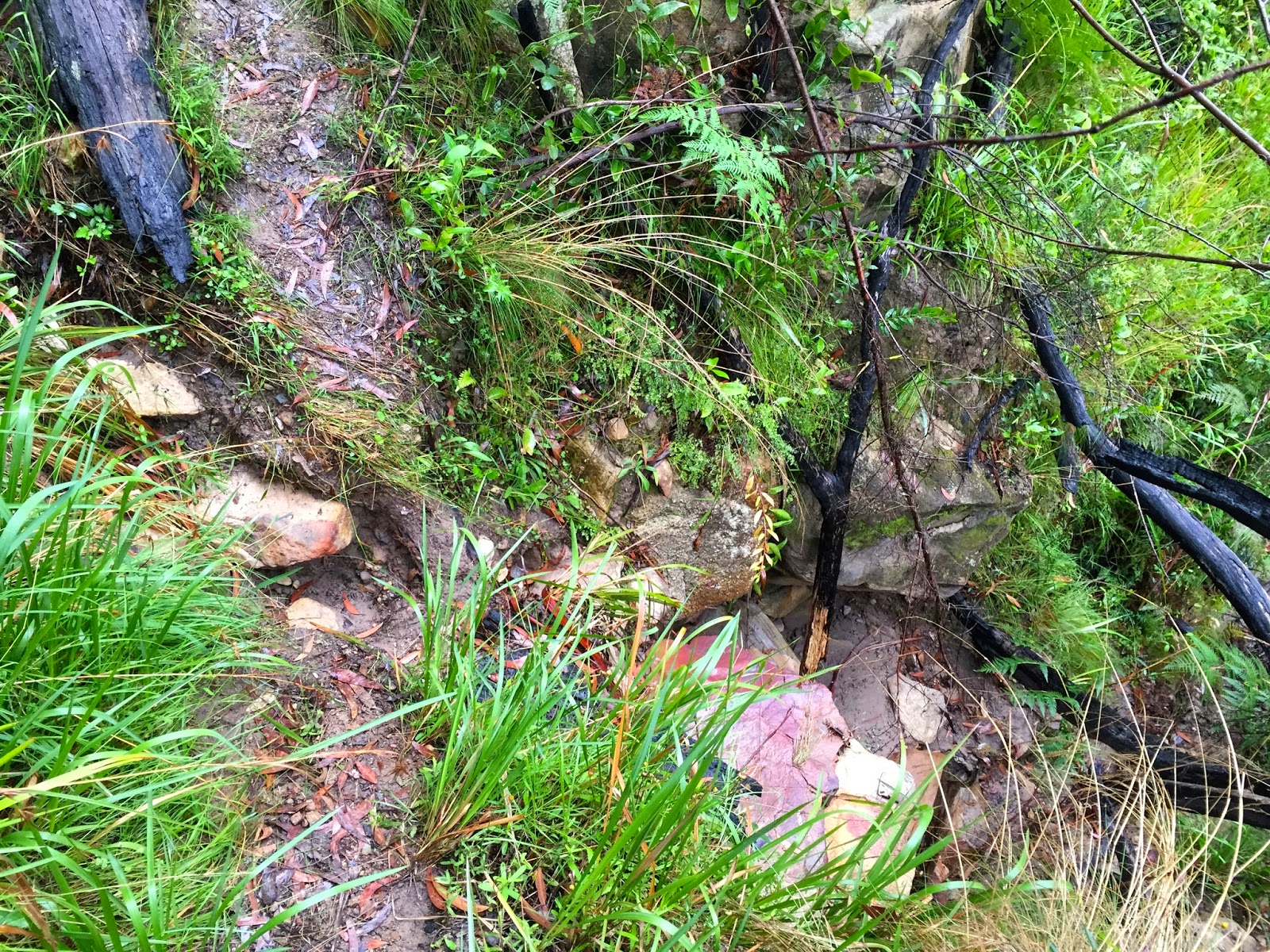 The trail washed away in several places.

The trail follows the Grose River.

I could not help but feel I was an extra in Jurrasic Park. My imagination wandered.

At any moment I expected T-Rex to materialise and eat Shell.

Thank goodness I had my pocket knife and would have little trouble coming to her aid.

The trail crosses the Grose River three times in total. 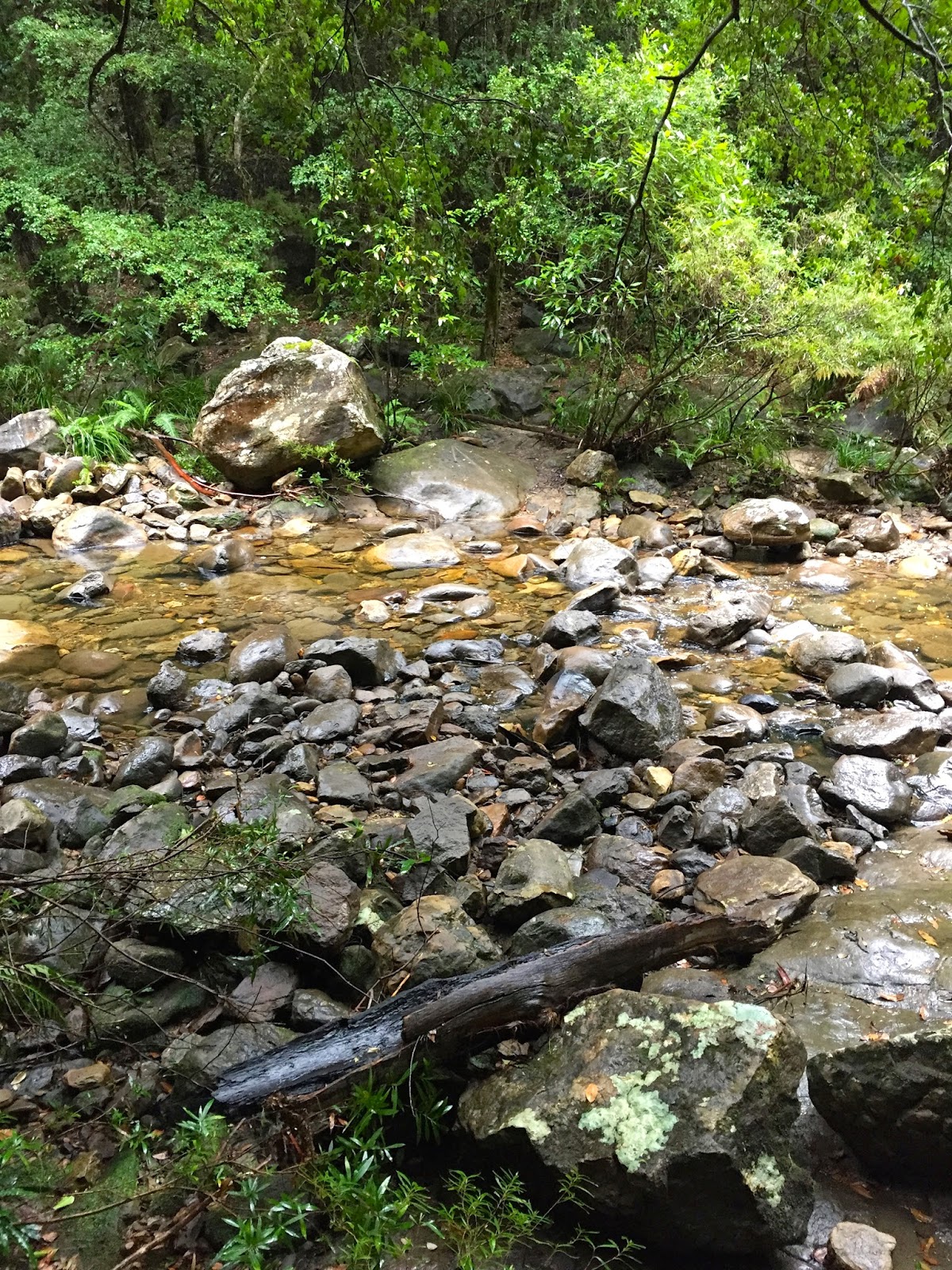 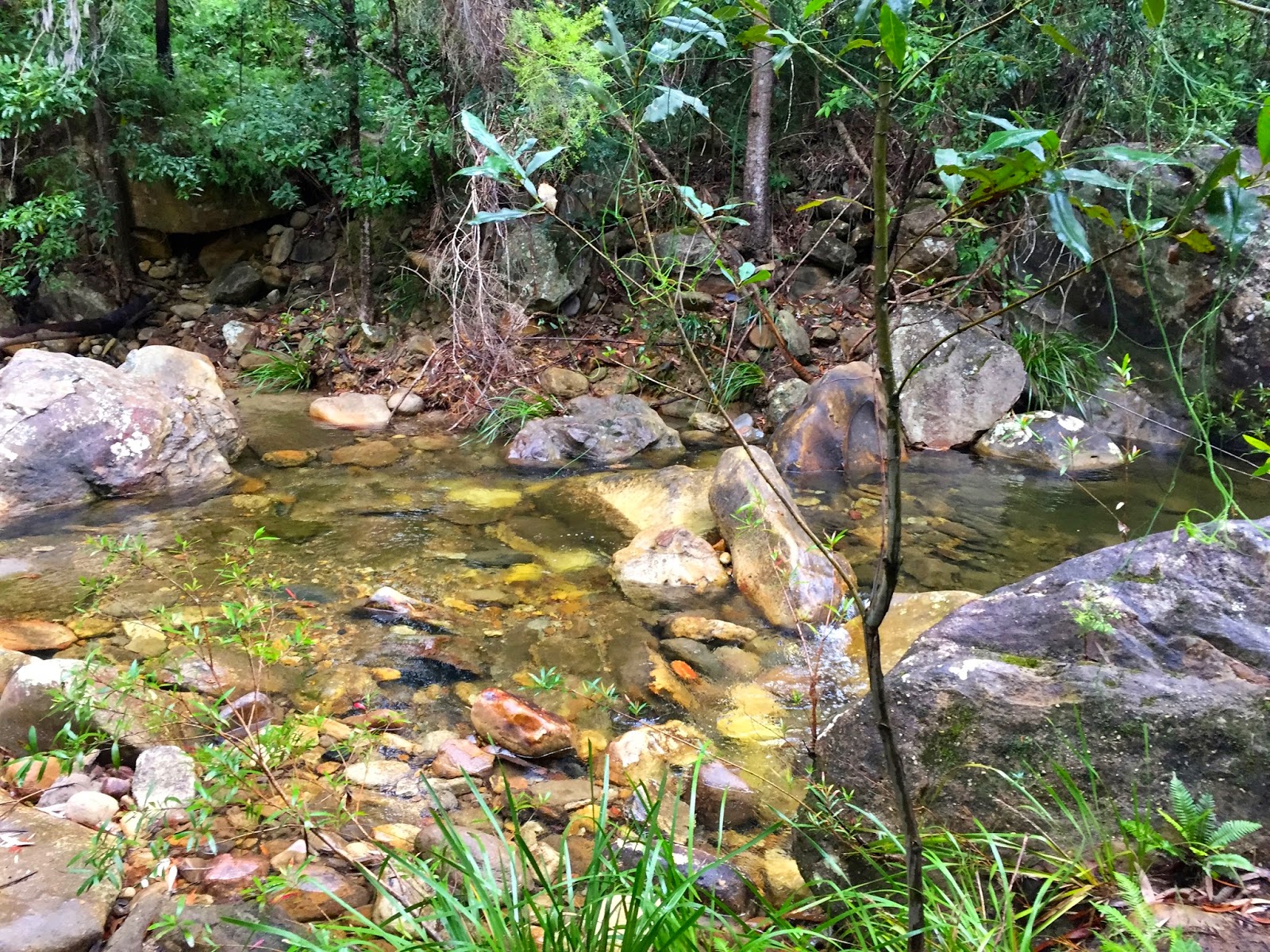 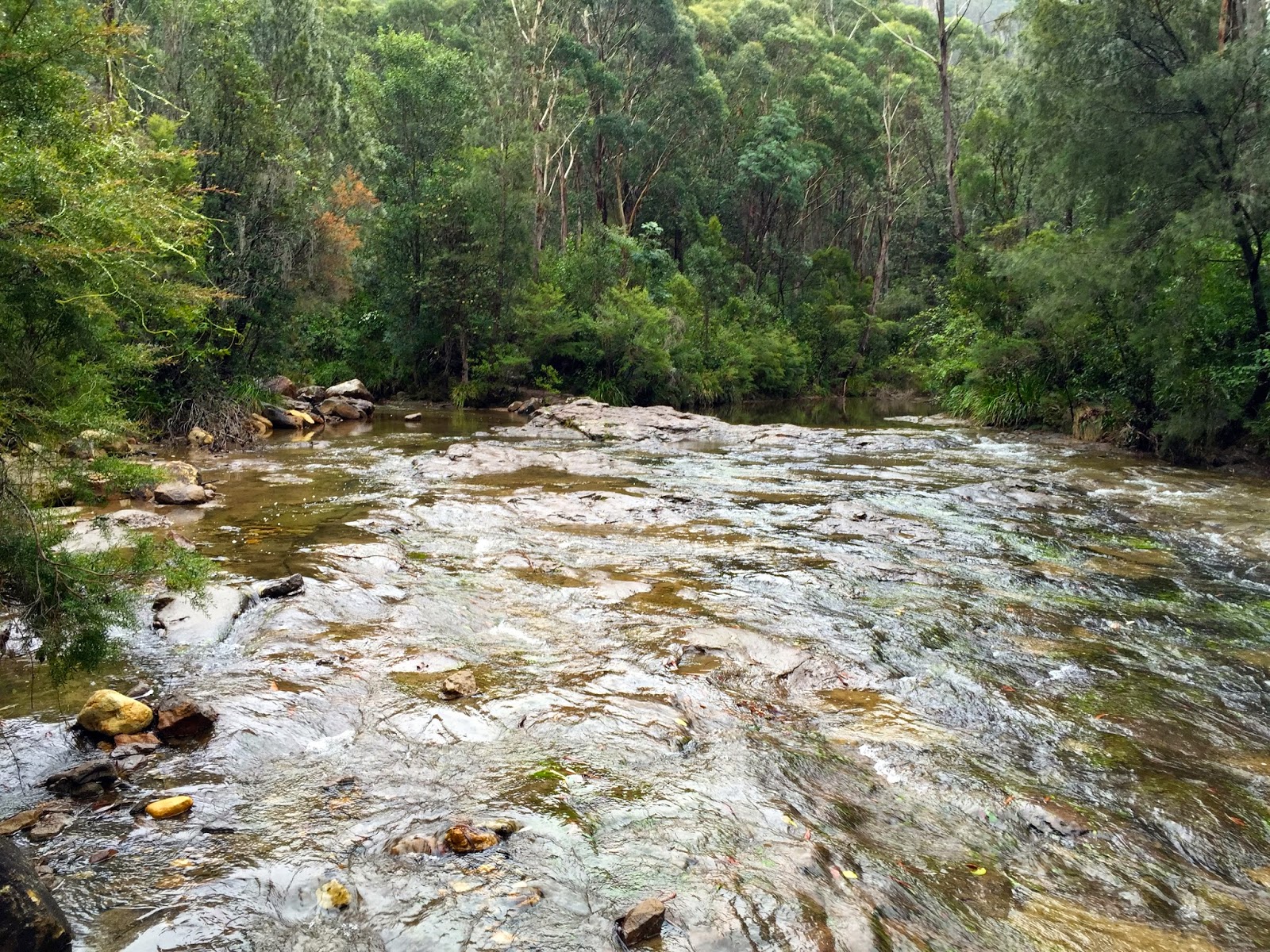 The three crossings of the Grose River.

We were making poor time in the conditions.

It would be fair to say that the trail had started to grind on me somewhat.

For some reason I wanted to stretch out and find a fast rhythm.

After the third crossing the trail became littered with fallen banksia flowers.

Shell wondered aloud which tree they had fallen from.

Marching on and her eyes in the trees she stepped on an innocuous stick.

For some strange reason I was watching her feet when it happened. Her ankle rolled and down she went.

Shell is a tough girl. I have seen her run, train and compete with injuries that would sideline most.

This was a bad.

On a positive note I did get to use the medical kit.

We strapped her ankle and she attempted to put weight on it.

It was clear she was in pain and I attempted to turn us around.

It ended this way.

"This is not some kind of fucking toughness competition!" I shouted in frustration.

"If it was I would win the trophy and you would be last!"

With that she turned and limped down the trail. 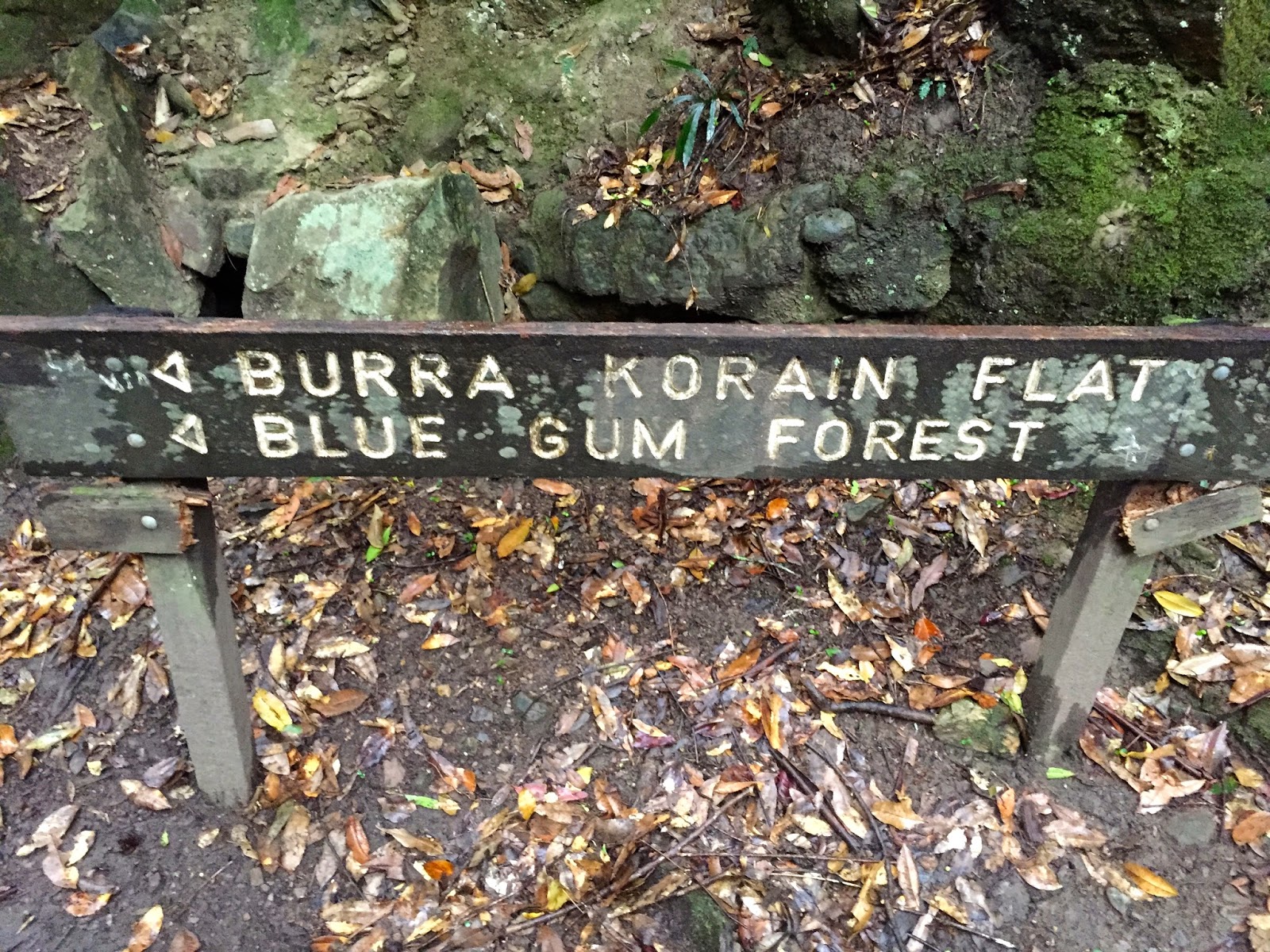 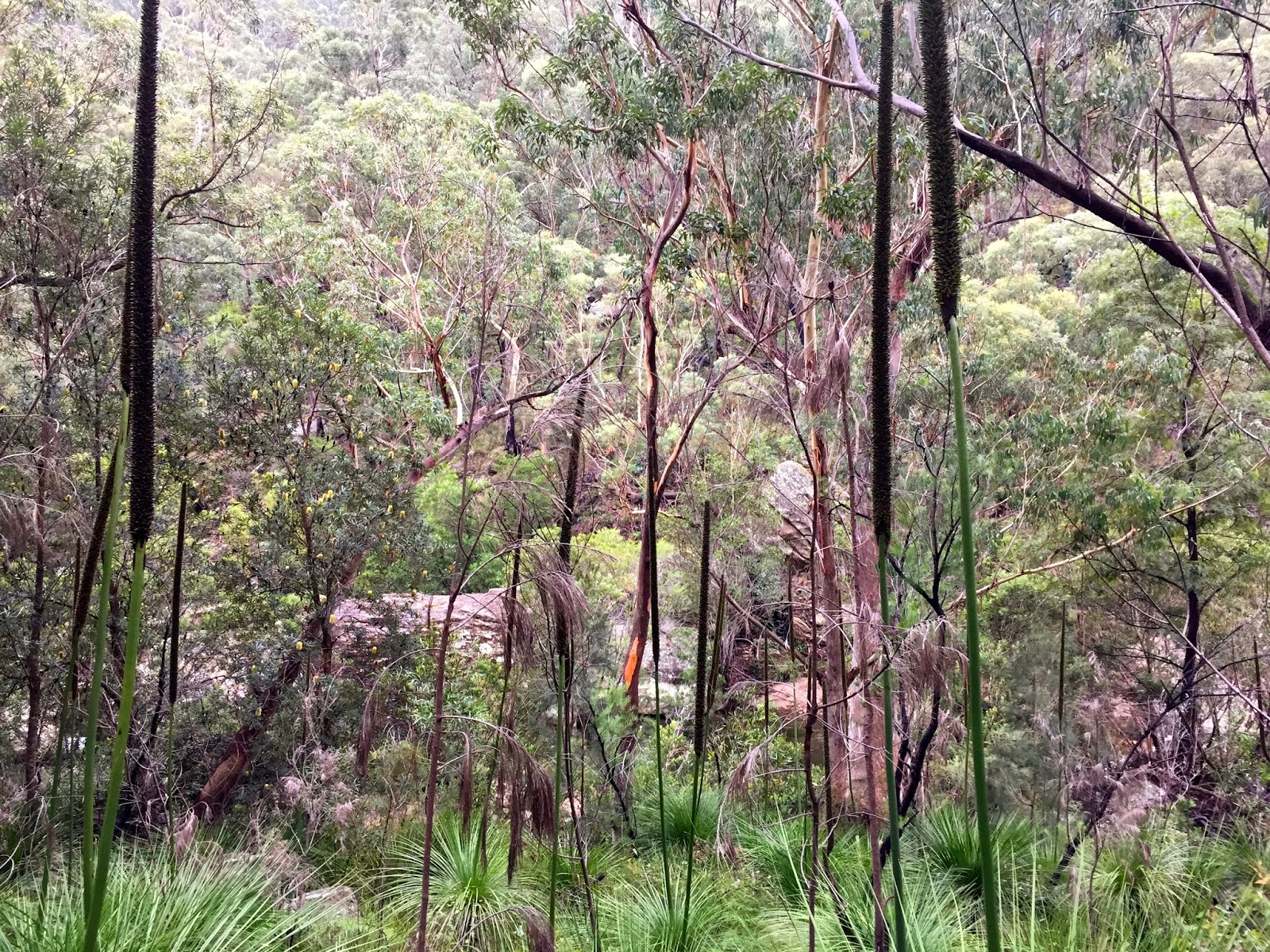 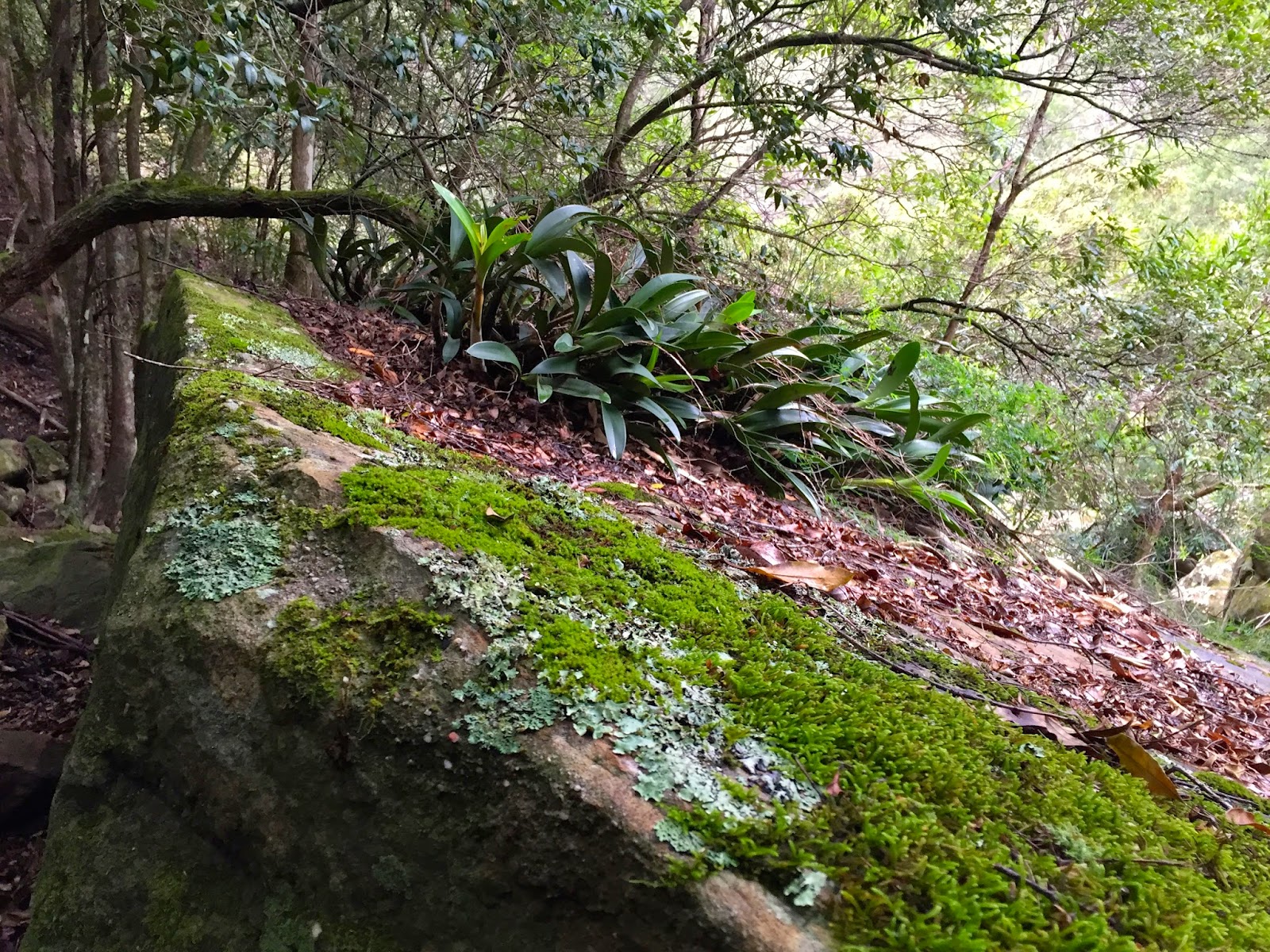 Flora on the hike.

The hike became a chore.

I spent the entire time watching where Shell put her feet.

At any moment I worried she would slip and require weight be put on her injury.

I worried about the climb out. The slippery footing and the sheer edge we needed to follow.

My suggestions of possible foot placement were interpreted as criticism.

Pleads to turn around were seen as negativity.

The mood was darkening.

It is hard to watch the person you love trudge on injured.

I did not know whether to admire her tough determination or marvel at her stubbornness.

Her limp was slowing us down but I dare not mention the fact.

In my mind I had ruled out camping the night.

In my experience sprains like these swell when the boot is removed and are worse the next day.

We reached the intersection of Pierces Pass and Acacia Flats and it dawned on me just how far I had misjudged this hike.

The sign indicated Acacia Flats follow the ridge line but the trail seemed to have completely washed away.

After twenty minutes scrambling the hillside trying to find the trail, the day getting late and the realisation just how far we had ahead of us I decided we needed to turn around.

We had it out at the intersection.

It was clear she viewed not making Blue Gums as a failure.

She even mentioned this blog and how I would feel not making it to Blue Gums.

Playing to my ego is usually a solid ploy but her welfare came first.

A lot was said during this 'debate'. Much of which Shell has taken back.

Needless to say we turned around.

A rare victory if one was counting. 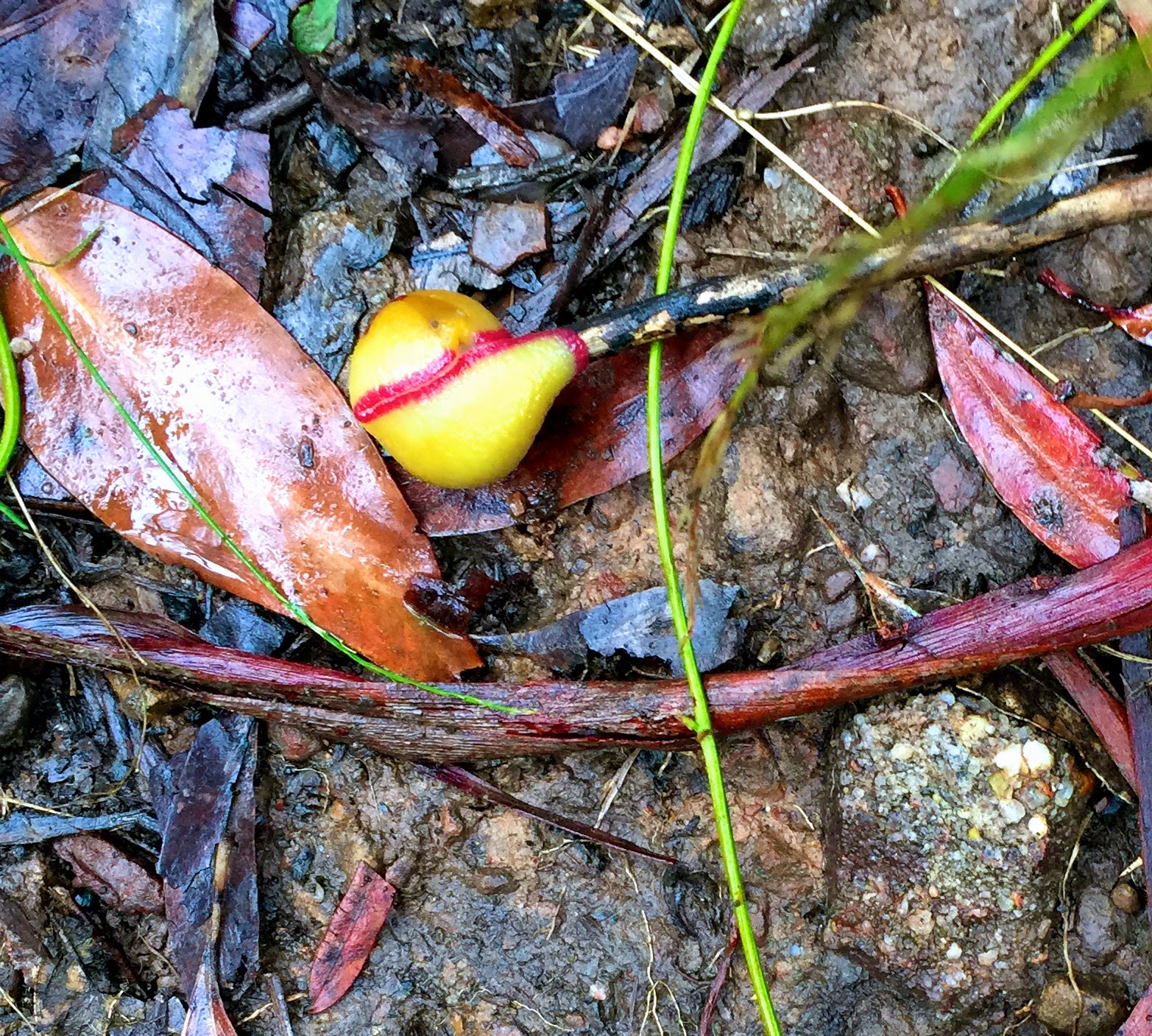 The hike back was tough.

Shells ankle was getting worse but she would never admit it.

I kept my words to encouragement. Always a safe bet.

The weather remained constant making the climb out slippery.

It was a stressful ascent.

When we finally made it to the Grose Valley lookout at the top we were both exhausted.

The weather had cleared and the view was stunning. 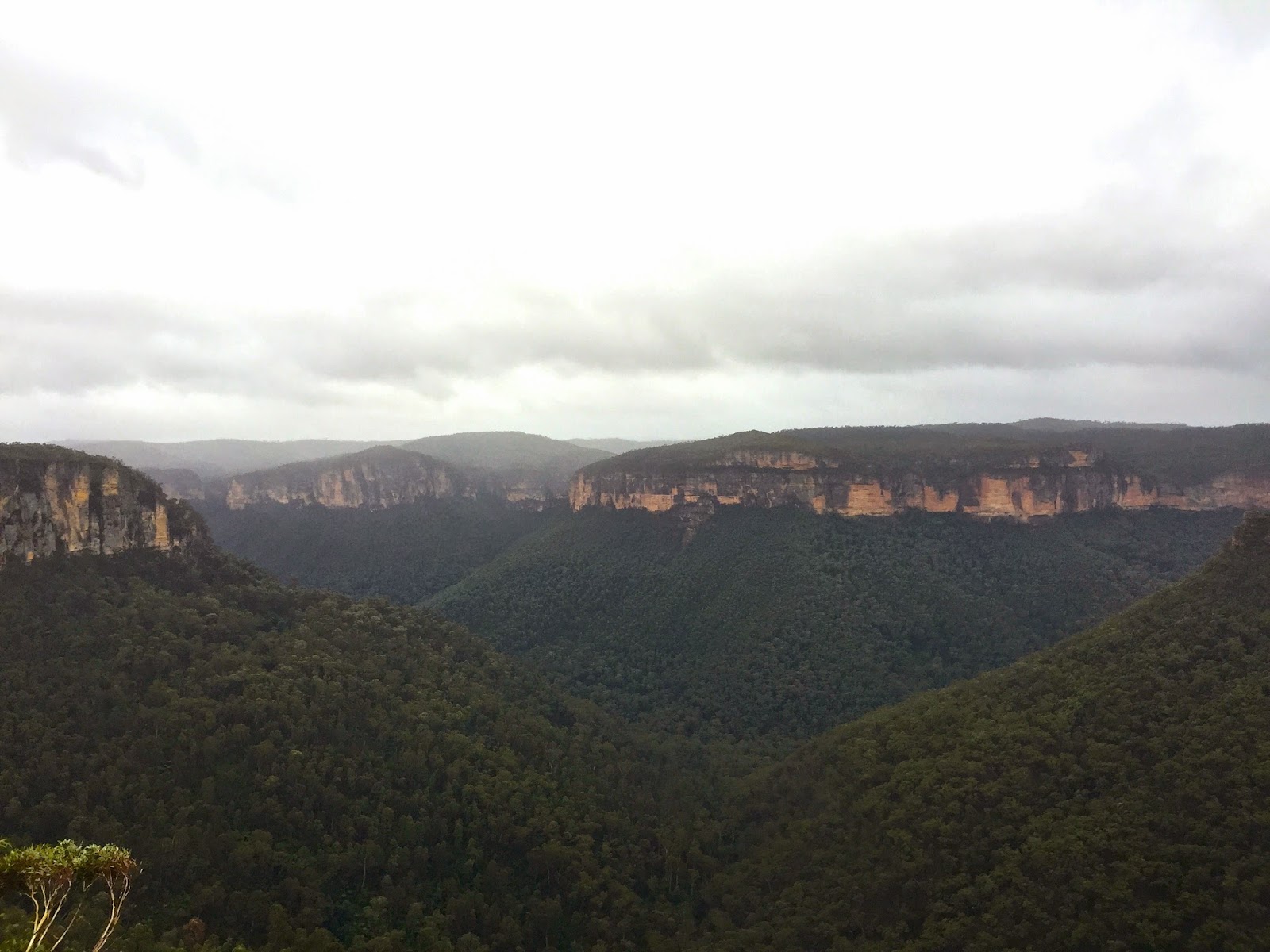 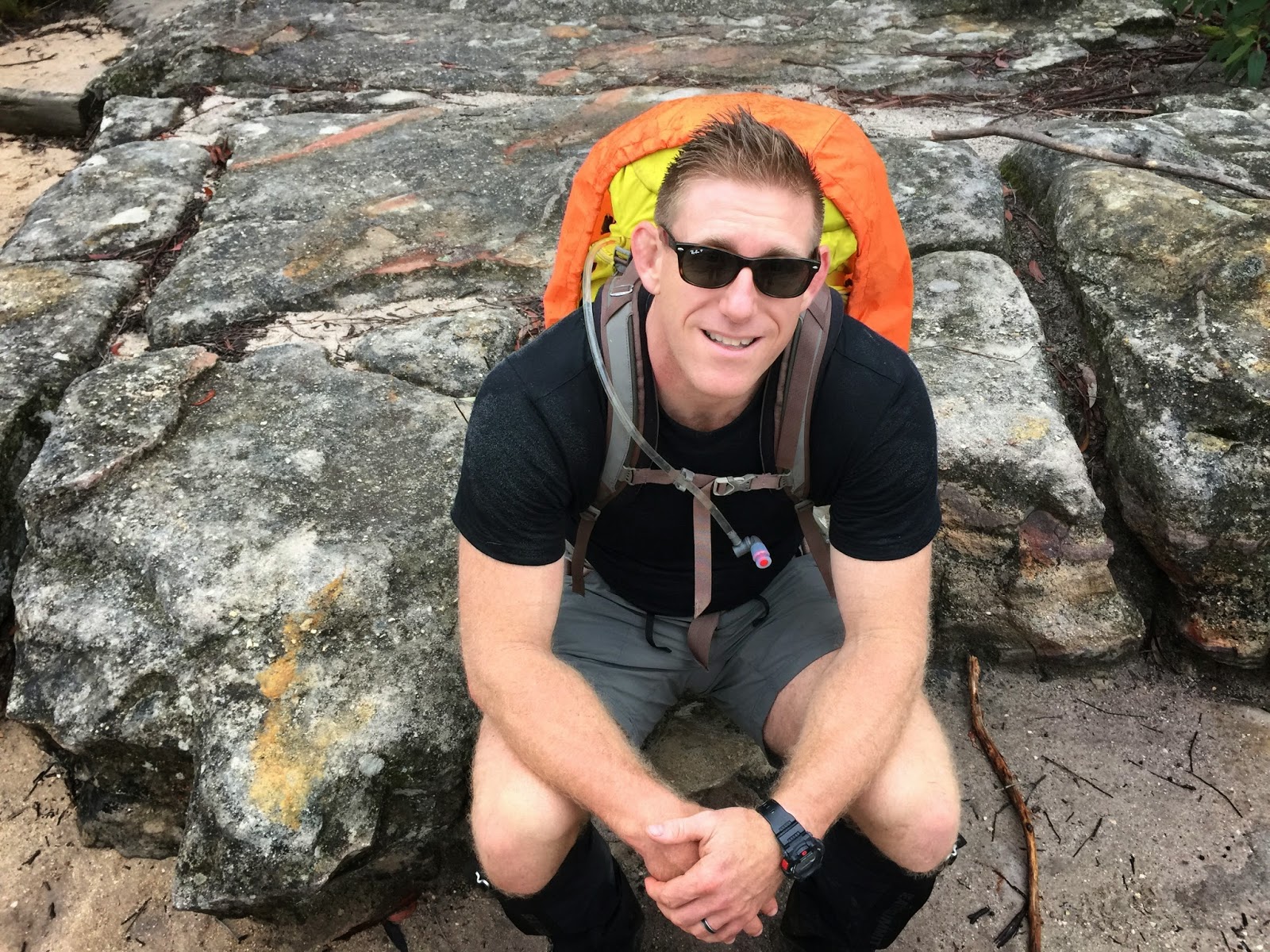 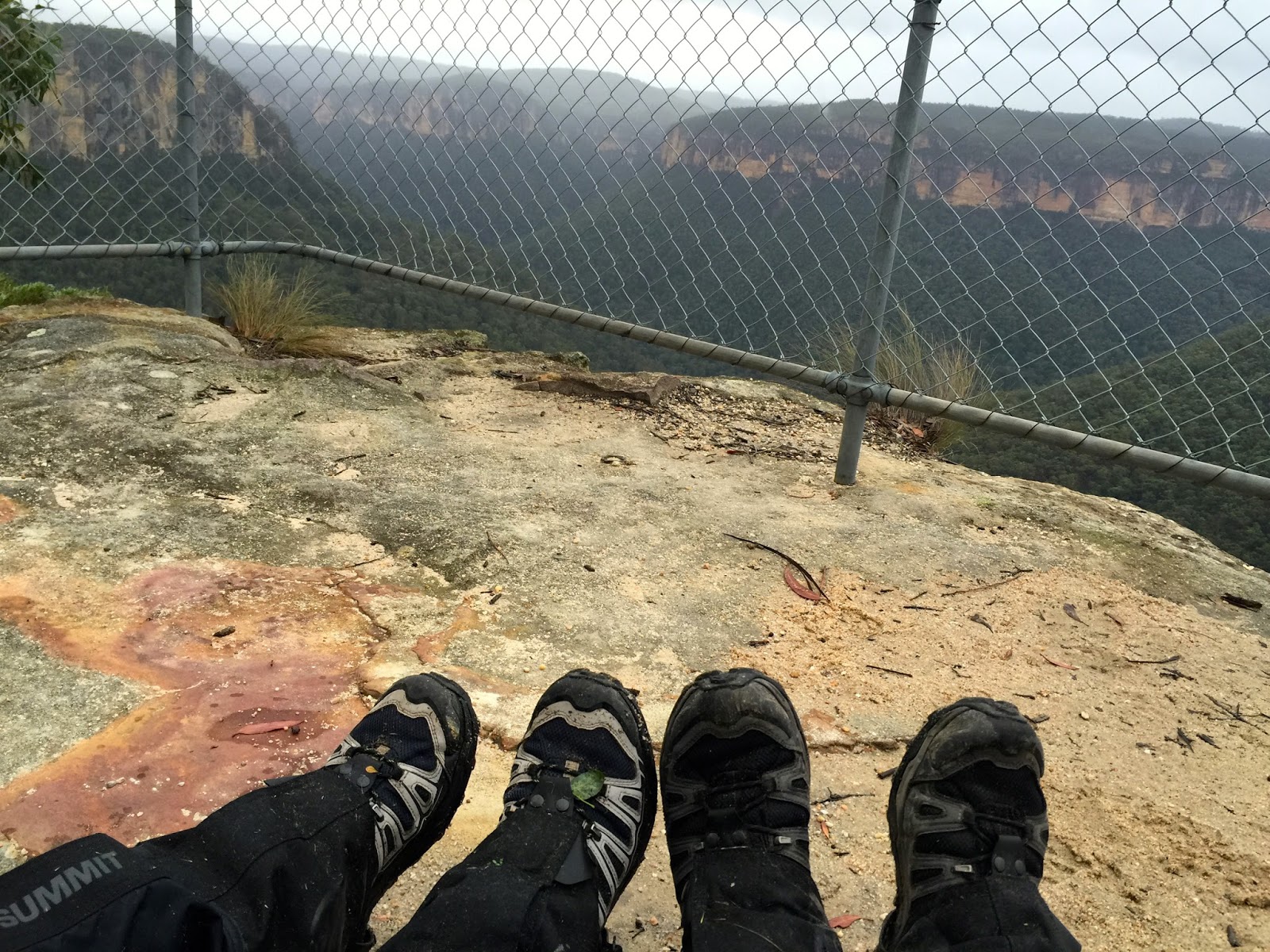 We had travelled 19km in nine hours that day.

For Shell 14km of this hike was on an injured ankle.

It was a challenging day.

There is no doubt this is a beautiful place to visit.

I had underestimated the terrain and the distance this day.

I will take a lot away from this hike. I have learnt a lot. 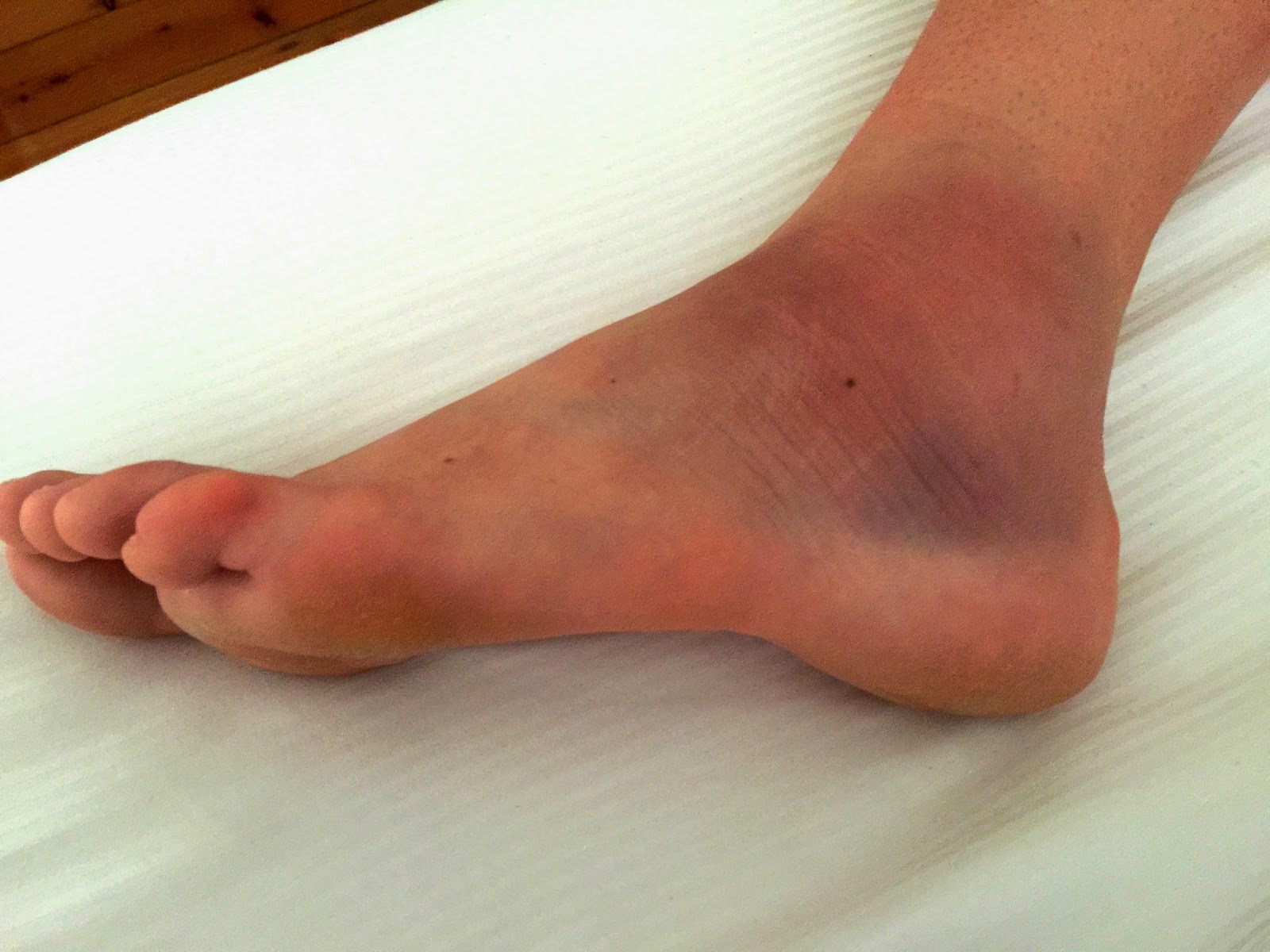 It is Tuesday morning as I am writing this.

We ran this morning.

I didn't even try to convince her it was a bad idea.
Posted by Grant Griffin at 17:28